Michael Bisping doesn’t hold back while raining verbal blows back at Dan Henderson.

The rivalry between Michael Bisping and Dan Henderson goes way back. This rivalry has now spilled over to social media. Henderson made a snarky comment about Bisping commentating at Fight Island and Michael Bisping wasn’t shy to say a few words himself.

Their rivalry began when they both were coaches of opposite teams on Ultimate Fighter. This rivalry also saw the insides of the octagon, not once but twice.

Bisping and Henderson met inside the octagon for the first time at UFC 100 in Las Vegas. Dan Henderson won this bout and went on to become the top contender for the middleweight title. In this fight, Henderson managed to hand Bisping one of the most devastating knockout seen in the UFC. 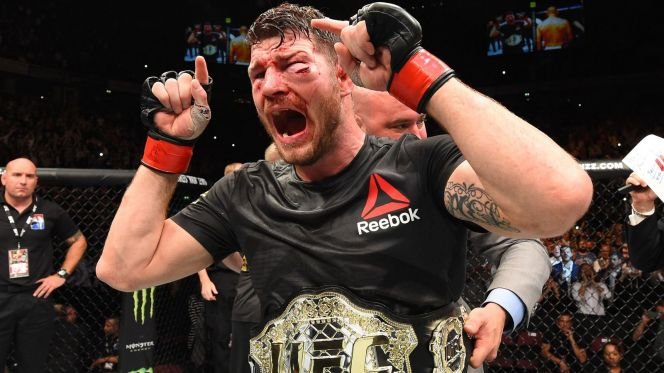 But it didn’t end there, Michael Bisping has a say in this too. Meeting at UFC 204 once again things went the other way this time. Bisping took the victory over Henderson via a unanimous victory in from of his hometown audience in Manchester.

The UFC currently has events going on at Yas Island in UAE’s Abu Dhabi. Soring a commentary gig Bisping is on the panel for almost all the fights. This didn’t seem to go down well with Dan Henderson. It seemed like it interrupted his viewing experience!

Taking about the event Henderson managed to slide a shot at Bisping too. He wrote, “Enjoying the fights as much as possible while having to listen to Bisping. Happy anniversary to the night I put you to bed.”

Enjoying the fights as much as possible while having to listen to Bisping. Happy anniversary to the night I put you to bed. @bisping

Michael Bisping didn’t hold back. he rained down on Henderson in a series of tweets. Bisping wrote, “Yeah on steroids mate. You cheating c***. No honor, no surprise. Then I beat you with one eye. Get fucked sour b****.

“Never won the UFC belt. Don’t be sour your old w*****. Now disappear back to obscurity. Drinking again and reliving your old glory. All polite to my face and talk shit online. Didn’t have you down as a keyboard warrior.”

Michael Bisping and Dan Henderson have been at each other’s throats for years. Let’s see how this evolves in the days to come!