Dana White’s ambitious UFC Fight Island has finally materialized with the realization of UFC 251: Usman vs Masvidal. It will be followed by three more events this month. Despite the global outbreak of COVID-19, UFC has been consistent with their live events. This has substantially benefitted the promotion with a massive raise in their PPV sales. UFC fighters are currently riding a fantasy tale by stepping inside the octagon during a worldwide lockdown. But it seems like Brit contenders, Chris Fishgold and Molly McCann, are on a fairytale journey of their own.

In an interaction with BT Sport, ‘Meat Ball’ Molly McCann revealed how she and Fishgold trode similar paths in their quest from being pub workers to UFC contenders. While the duo is set to appear in their respective bouts on July 15, Molly McCann thrilled several fans with a glorious revelation of her personal life and MMA career alongside Chris Fishgold.

"I worked in a nightclub in 2010 with Chris Fishgold. He was a doorman and I was a shotwoman."

"We were both champions at the same time. The he got signed and I got signed…"@MeatballMolly tells the amazing story of how he MMA journey has intertwined with @ChrisFishgold 🙌 pic.twitter.com/imXZ4Tu11E

Both Molly McCann and Chris Fishgold are currently signed with the UFC. But the pair have been together throughout their MMA career in other promotions, too. ‘Meat Ball’ McCann revealed how things were different for them a decade ago.

In 2010, Molly McCann used to work as a shot woman and Chris Fishgold as a doorman in a UK nightclub. The duo then reportedly left their job to pursue a career in MMA. No wonder the pair never had to turn back since then. They became world champions at the same time in Cage Warriors. Now, the two have signed with UFC, the world’s largest MMA organization.

“I worked in a nightclub in 2010 with Chris Fishgold. He was a doorman, and I was a shot woman.

Also Read: “The Brand Has Never Been Stronger Than it is Right Now”- Dana White Opens Up On UFC’s 2020 Plans

Featherweight contender Chris Fishgold has faced two losses in his three UFC appearances. He will look to get back into the win column against Jared Gordon at UFC Fight Night: Kattar vs Ige on July 15.  Fishgold faced a crushing defeat against Calvin Kattar via first-round KO in his debut at UFC Fight Night: Oezdemir vs Smith. However, he bounced back to the win column against Daniel Teymur, followed by another loss via submission against Makwan Amirkhani. 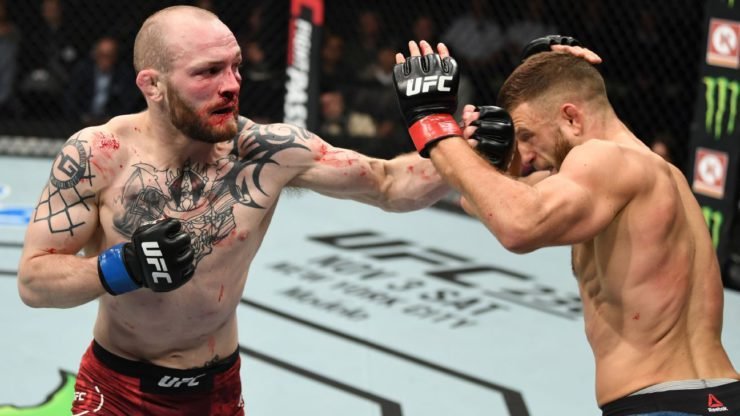 Meanwhile, “Meatball” Molly McCann is 3-1 in UFC. She faced a similar misfortune on her debut against Gillian Robertson and lost the contest via second-round submission. However, McCann bounced back to the win column against Priscila Cachoeira and is on a two-fight win streak in UFC.  She will fight Taila Santos next.