The UFC has been delivering live sports action amid the coronavirus since May. The promotion was one of the first sports to return to live events since the pandemic shut everything down. Covington Vs Woodley added to the list of impressive fights put on by the UFC during this time. This a testament to the efforts of Dana White.

Fans may know Dana White as an astute businessman who built the UFC from nothing. He is a hard negotiator who always delivers on his promises of giving the fans the best possible fight. However, there is a playful side to the UFC President that few people know of. 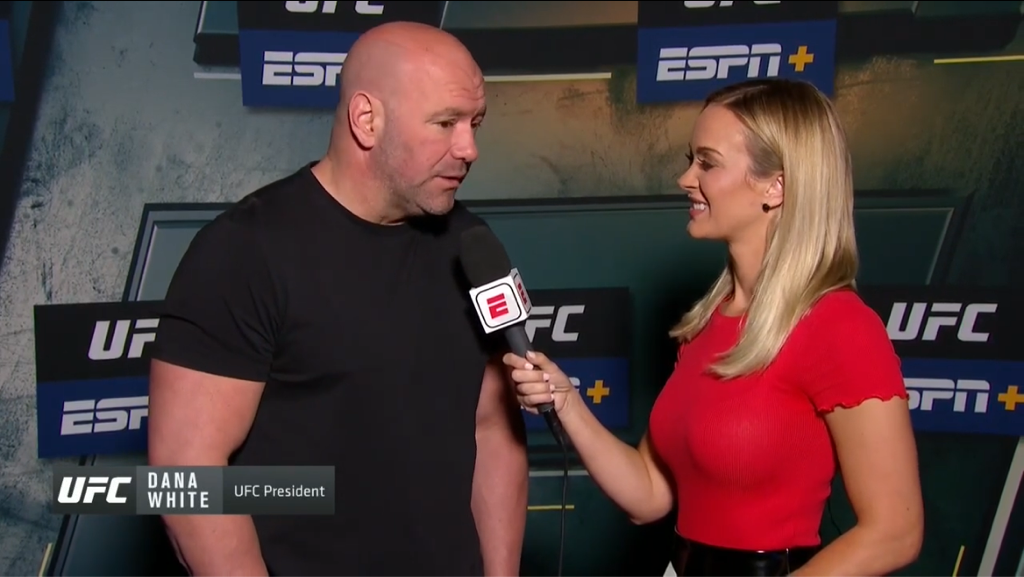 This was recently displayed leading up to the latest fight card. Dana’s victim this time was Laura Sanko, a former professional MMA fighter. Sanko is now a host for ESPN and covers the UFC live events.

Dana White displays his playful side at UFC Fight Night

The former pro-MMA fighter Laura Sanko while covering UFC Fight Night: Covington vs Woodley was given the shock of her life by a playful Dana White.

In the video, fans see Laura Sanko getting herself ready before appearing on live TV. While doing so, Sanko was inattentive to her surroundings. Dana White noticed this and took advantage of it and approached her from behind, thereby startling her.

While Sanko was fixing her hair Dana White snuck up and said, “Are you ready for tonight?”

A surprised Sanko was taken aback and replied, “Oh my God! You’re such a d**k.” The pair then laughed it off.

Dana got me good this time 😂🤣😂…thank god the social team was rolling before we went live. The audio might be my favorite part. Go to the @ufc Facebook page to see the real interview…but know this @danawhite….It. Is. On. 😈 #ufcvegas11

UFC Fight Night Covington vs Woodley delivered on all the hype. Spectacular performances from the likes of Chimaev, Dern, and Walker delivered on all the company built the card up to be. The main event of the card was as advertised. Colby who claimed the win over a former champion now has bigger fights in his sights. All in all, a good night of fights.

WATCH: Tyron Woodley Screams in Agony as He Suffered A Devastating Rib Injury Against Colby Covington