The second fight in the preliminary card of UFC on ESPN: Eye vs Calvillo followed up a quick finish. However, Tyson Nam had other ideas as he notched up an even quicker finish over Zarrukh Adashev in their Catchweight bout.

The bout originally set for Bantamweight was converted into a Catchweight fight as ‘The Lion’ missed weight on Friday. He came in 2.5 pounds over the 136 lbs Bantamweight limit. 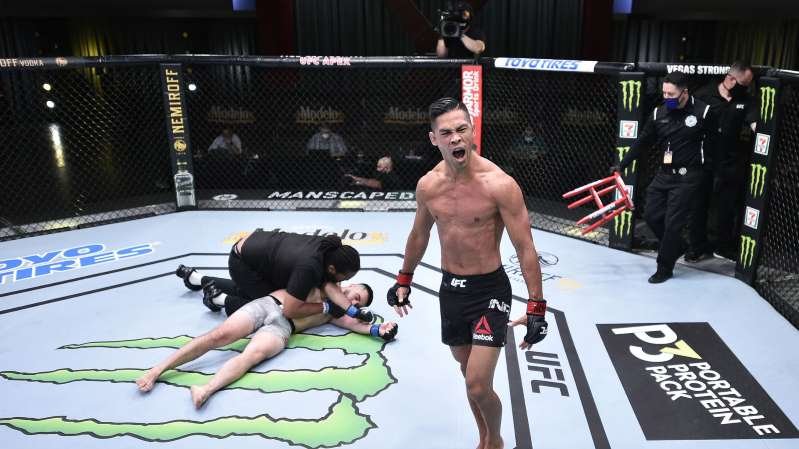 In his UFC debut, the Uzbek fighter began feeling his opponent and went in for the tried and tested formula of leg kicks. However, Nam wasn’t having any of it as he immediately nailed ‘The Lion’ with a right fist to his left cheek to send him crashing to the canvas just 32 seconds into the fight.

It wasn’t an auspicious start for Adashev who headed into the fight after being fined 20% of his fee. But Nam was emotional as the decision was announced. He competed in MMA for 14 years in various promotions. However, he only got his big break last year and debuted in the UFC.

At UFC Fight Night: Rodriguez vs Stephens he fell to Sergio Pettis. Earlier this year at UFC Fight Night: Felder vs Hooker he lost to Kai Kara-France. Both defeats came via unanimous decision. This could have been a reason Nam went for the quick finish.

At 36, Nam knows time is running out quickly for him to make a mark in the UFC. On the other hand, ‘The Lion’ suffered his 2nd overall loss but at 27, he will be looking to make a quick turnaround.

One of the things he will be looking out for is to defend against an opponent going for a quick knockout. However, despite Adashev’s relative inexperience, one can’t take away from Nam’s sweet finish.

What did you make of the fight?

“Lauren Murphy is not my Concern” – Cynthia Calvillo