At Fury Pro Grappling 3, fans got to see UFC stars in action for the last time in 2021. The Cage Fight event was power-packed with UFC regulars such as Kevin Holland, Sean Brady, Donald Cerrone, Clay Guida, and the headline fighter-Carla Esparza, on the fight card. However, the results were a little mixed in the submission-only tournament. The event took place on Thursday at  2300 Arena, Philadelphia, and streamed live on UFC Fight Pass.

Reportedly, Carla Esparza lost the main event to BJJ star Danielle Kelly via injury stoppage. The round looked good for the former strawweight champion at the beginning. ‘Cookie Monster’ suffered an injury because of a forehead collision. And the referee stopped the fight at the 4:26 mark.

The headliner between ‘Cookie Monster’ and Danielle Kelly could not go to the full length as Esparza suffered a nasty cut on her forehead resulting from a headbutt. Notably, Esparza picked Kelly up to loosen her opponent’s grip on her and slammed Kelly back on the mat.

However, in the process, Esparza and Kally’s heads collided, and blood started gushing out from the former’s eye. Forcing the referee to intervene and giving the win to the BJJ master.

The former UFC strawweight champion gave her fans a visual of the nasty cut she sustained on her forehead via a post on her Instagram. 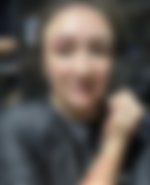 Carla Esparza served as a late replacement for current UFC strawweight champion Rose Namajunas. ‘Thug Rose’ could not join the fight because of the implications of the new COVID protocols in place.

Meanwhile, UFC President Dana White has confirmed that Namajunas will face ‘Cookie Monster’ in her next title defense. Esparza is coming off a second-round stoppage victory over strawweight #4 Yan Xiaonan.

Apart from the women-centered headliner, the UFC Fight Pass event had a lot of other interesting bouts. Remarkably, the event was hosted by none other than the entertainment wrestling icon CM Punk, who made the occasion memorable with his impeccable mic skills.

UFC stars such as Kevin Holland, Sean Brady, Donald ‘Cowboy’ Cerrone, and Clay Guida graced the event. Sean Brady clinched the victory in his hometown. Judges awarded the undefeated welterweight the win against Craig Jones as he successfully nullified all of his opponent’s submission advances.

Vintage comeback star Clay Guida was one of the UFC stars who could register a win at the event. The veteran locked horns with Billy Quarantillo and overshadowed his opponent with his wrestling-centered approach. Judges awarded the victory to ‘The Carpenter’ after an 8-minute battle.

However, the night wasn’t as memorable for all of them. Kevin Holland went to war against Kody Hamrah. The notable UFC middleweight could hold his ground in the grappling event and even slammed his opponent quite a few times. However, Hamrah remained persistent in his techniques and later clinched a decision victory.

Other Fury Grappling results are:

Did you like the UFC Fight Pass event? Tell us in the comments below.

Aashish Kumar is a UFC writer at EssentiallySports. A graduate in Journalism & Mass Communication, this Israel Adesanya fan has interned at reputed media houses and gained valuable reporting experience. Building on that experience, Aashish will look to tap into his love for combat sports and let fans benefit from his passion and journalistic expertise.
ARTICLES BY AUTHOR