Danny Roberts returned to the octagon for the first time in almost two years against Ramazan Emeev at UFC Fight Night 195. It was a successful outing for the 34-year-old as he got the win via a controversial split decision.

During the fight, Roberts suffered a gruesome head cut after his opponent landed a spinning elbow on him in the second round. Roberts started bleeding pretty badly during the welterweight fight. However, since the cut was above the hairline, it was difficult to judge the extent of the injury.

After the fight, UFC President Dana White shared a video of the head gash on his Instagram. Watch the injury below (Warning – Graphic Content) 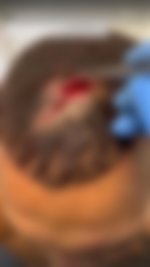 Orthopedic Sports Surgeon and UFC ringside physician Dr. David Abbasi updated the fans on the extent of the injury. He tweeted saying, “Danny Roberts suffered NASTY cut on scalp after an elbow! Below hair & skin is his PERIOSTEUM, the connective tissue directly under skull. Doc used Non-black suture, so its easier to remove in about 10 days! Heal up my friend @DanHotChocolate.”

Danny Roberts suffered NASTY cut on scalp after an elbow!

Below hair & skin is his PERIOSTEUM, the connective tissue directly under skull.

Doc used Non-black suture, so its easier to remove in about 10 days!

Despite the nasty injury, ‘Hot Chocolate’ held his own and went on to win the fight. He is now on a two-fight win streak, his last win coming at UFC Fight Night 163 against Zelim Imadaev. Roberts won that fight via a knockout in the second round.

Both fighters left everything in the octagon and put on a great fight. It was a back-and-forth battle between the two, with both fighters having their moments. At the end of it all, Roberts prevailed as the victor, according to the judges. He won the fight via a split decision.

However, the decision left most people perplexed. Even though the fight was close, most people had Emeev winning. Judge Chris Lee scored the fight 30-27 and was at the end of a lot of criticism.

At the post-fight presser, Roberts himself said that he was confused with the scorecard. He said, “If it had been a little bit closer, I still would have known it would have been mine, but when I heard that 30-27, I was a bit like, hang on, who has given it to what way here?”

What did you make of the fight? Let us know in the comments!