VIDEO: Conor McGregor Gets Carried Out of the Building on a Stretcher While Interacting With Fans

The bittersweet rivalry between Conor McGregor and Dustin Poirier ended tonight with McGregor breaking his ankle in a freak accident. The medical team immediately rushed to McGregor’s aid and declared an ankle breakage. Hence, Dustin ‘The Diamond’ Poirier closed the trilogy fight by round 1 TKO because of a doctor stoppage.

After the fight, he insisted on letting Poirier know that this fight ended with a doctor-stoppage. The Irishman was later carried out on a stretcher.

Conor McGregor was visibly in immense pain because of his freak injury. While McGregor sat cage-side with the medical team, the judges declared Dustin Poirier the winner. In a post-fight interview with Joe Rogan, Dustin Poirier revealed that he felt Conor McGregor’s ankle crack when he checked one of his kicks in the initial minutes of the fight. McGregor instantly reacted to this by denying his claims, while being attended to by the medical team.

Is the end of the line for Conor McGregor?

Conor McGregor clearly did not look pleased with the outcome of the fight. He started the bout by delivering a barrage of leg kicks and even attempted a guillotine choke. However, ‘The Diamond’ freed himself and later hurt McGregor on the ground by showering down jabs to the face as he gained the top-mount position.

Conor McGregor again attempted a guillotine choke, and Daniel Cormier immediately pointed out that he should not have done that. Unsuccessful in his second attempt to get Poirier under a choke, ‘The Diamond’ continued to capitalize on his top-mount position. However, as the fighters stood back up, both fighters exchanged jabs. During this exchange, McGregor broke his ankle as he stepped back toward the cage.

Conor McGregor heard something he didn't like before the official decision.#UFC264 pic.twitter.com/7UNauiqUWj

Man, I wonder if he will ever fight again after this.. heal up champ, this is terrible

Part 4? Can make a strong case down the line.

Good always defeats evil.
Very happy for @DustinPoirier I hope you will get the belt end of the year

With UFC 264 ending on an unfortunate note, what is next for ‘The Notorious’ McGregor? In recent interviews, the Irishman has shown interest in fighting Nate Diaz again for the third time. After his recent post-weigh-in clash with Rafael dos Anjos, perhaps that is one fight that could come to fruition as well. Conor McGregor could also choose to switch over to a re-run at boxing. 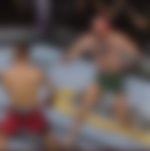 While Conor McGregor still has a few cards left on the table, it might take him a while to recover from this unfortunate second loss. What do you think happens next with ‘The Notorious’?