Most fighters coming into the UFC from Dagestan have a background in combat sambo. Both Islam Makhachev and Zabit Magomedsharipov grew up training and competing in sambo before they made the move to the MMA.

One can see how the training has equipped them for MMA with their sneaky trips and creative throws. Interestingly, an old recording of a sambo match between Islam and Zabit has been doing the rounds on the internet.

Although the footage might be a little grainy, the fight still makes for a great watch. Two dominant fighters in their own right, Islam and Zabit, began with a bit of striking before Zabit exploited on a reckless kick by Makhachev to get the takedown.

Zabit excelled at keeping top mount, controlling Makhachev from the top position for the entire round. However, the tide turned in favor of Islam Makhachev in the second round.

Makhachev came out strong and unmoved from the events of the previous round. Even though he had trouble dealing with Zabit’s blistering strikes, Makhachev kept his patience and ultimately got the takedown.

From here on, Makhachev latched onto his opponent, dishing out punishment while skillfully controlling him on the ground.

Makhachev became a World Champion in Combat Sambo at 74kgs, back in 2016. Having achieved champion status in Sambo, the Dagestan native has been on another quest to become a champion in the UFC.

Islam Makhachev recently picked up a fourth-round submission win against Thiago Moises. The 29-year-old is now on an eight-fight win streak in the UFC and now holds the fifth rank in the lightweight division. 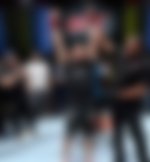 Makhachev has been extremely vocal about wanting to fight RDA, often accusing him of being scared and running away. However, there will be no more of that, as the two will face each other in a three-round fight at UFC 267.

Although Makhachev will enjoy the upper hand in the wrestling department, RDA’s striking might be a problem for the Dagestan native.