Rose Namajunas is the 2nd ranked Strawweight fighter in the UFC. The 28-year-old will make her highly anticipated return to the Octagon after over 14 months out. ‘Thug Rose’ was to compete at the original UFC 249 and later she pulled out of the rescheduled event. Now ahead of her return we take a look at 5 little known or forgotten facts about the former champion.

The origin of her Rose Namajunas nickname

Fighter nicknames play a huge role in promoting the fighters who often become renowned due to it. At times, it reflects their personality outside the cage, whilst on occasions, it reflects their fighting style or their aura. For Namajunas, it can be attributed to who she is.

In a chat with Joe Rogan a couple of years ago, she spilled the beans on ‘Thug Rose.’ On the Joe Rogan Experience, she said, “My ice-cold stare, like staring down Joanna, I developed that long ago. I was never a witty person. I never had like a good comeback for anything, so I just had to beat people’s a** that was making fun of me. Or I had to scare them off. So that’s like where it came from.” 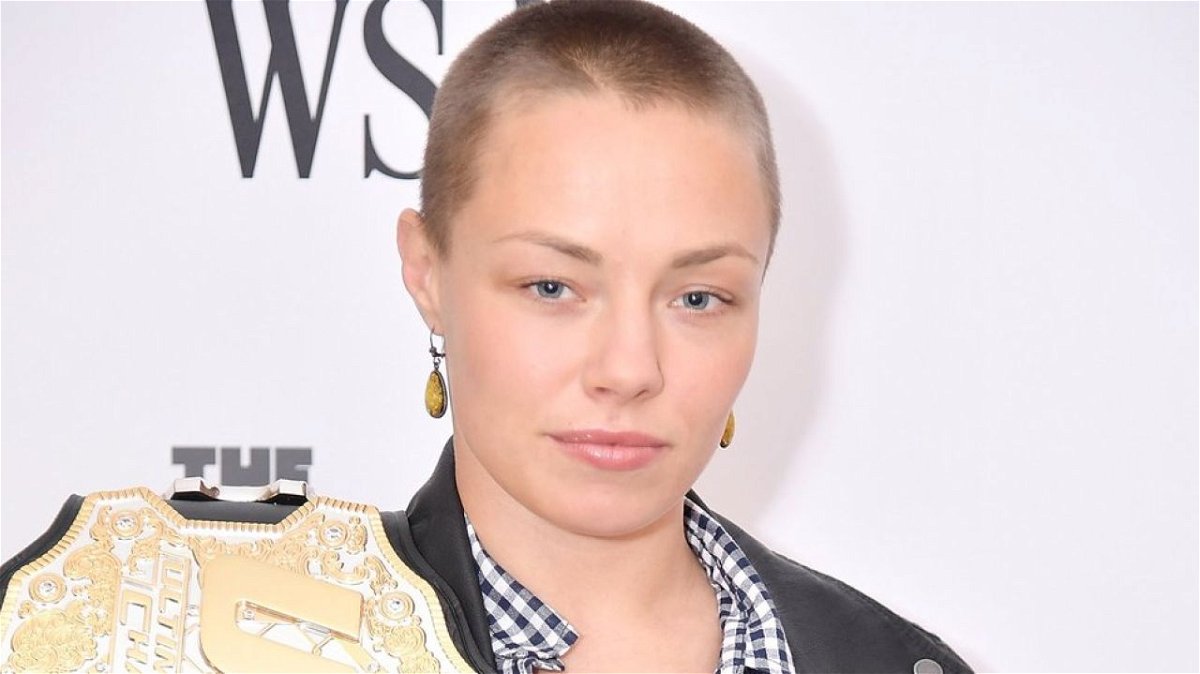 The name has certainly stuck and fans can see why as the look is ever-present in her fights. Now she is known by her moniker all over the planet.

When Rose Namajunas made the switch from Invicta to the UFC, she had long locks. However, a few months after her UFC debut, she sported a buzz cut that shocked the audience at the time. The fighter revealed her new look in an Instagram post and explained what motivated the makeover.

She wrote, “It’s a fight not a beauty pageant. S**t’s in my way at practice…cut it off!”

‘Thug Rose’ has ascended to the pinnacle of the division and made her look iconic among MMA circles. The hairstyle shows her dedication to her chosen profession which she has displayed from a young age.

‘Thug Rose’ is a young achiever

Namajunas competed in fights right from the time she came of age. She went undefeated in amateur competition between the age of 18-20. ‘Thug Rose’ signed with Invicta at 20 and claimed 2 quick submission wins as a professional. The first of these came via rear-naked choke, which has gone on to become her signature submission. The strawweight fighter has claimed 4/ 5 career submission victories by tapping her opponents via the hold.

In her 2nd fight, Namajunas claimed a lightning-quick 12-second win via a flying armbar. At 21, she competed in the Strawweight Championship tournament. En route to the final, ‘Thug Rose’ submitted Alex Chambers, Joanne Calderwood, and Randa Markos. However, Carla Esparza proved to be a little tough for the youngster who tapped to a rear-naked choke.

At 23, Namajunas launched a comeback and claimed 3 wins on the bounce. She beat Angela Hill, Paige VanZant, and Tecia Torres. ‘Thug Rose’ lost a split decision fight to Karolina Kowalkiewicz but tied the women’s UFC submission record in her very next fight to set up a clash with the undefeated Joanna Jędrzejczyk aged just 24.

Rose Namajunas went on an impressive run and earned a clash against Jędrzejczyk. The fight revealed a fired up ‘Thug Rose’ who claimed a maiden win via TKO and ascended to the pinnacle of the women’s 115 lbs division. She was just 25 at the time and ended Jędrzejczyk’s perfect 14-0 record with a stunning first-round finish. 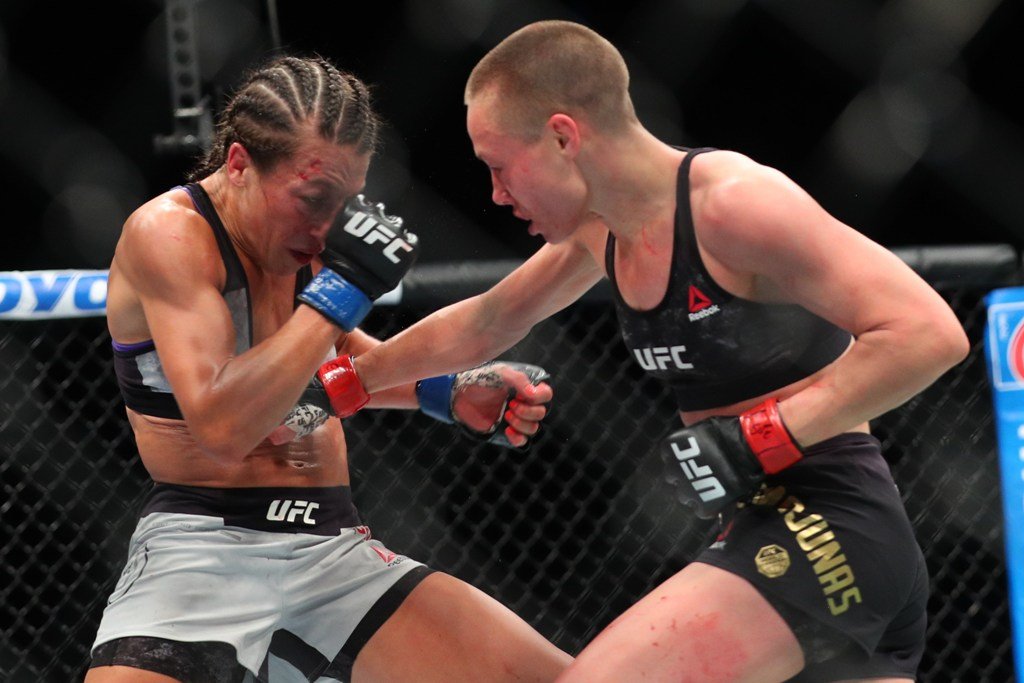 The shocker took place at UFC 217 at Madison Square Garden. 6 months later, the strawweight fighters met at UFC 223 with ‘Thug Rose’ proving to the world that her win was no fluke. She handed the Polish fighter her second defeat on the bounce to retain the strap.

Held record for most submissions in women’s UFC

‘Thug Rose’ held the record for the most submission wins in the UFC and still holds the same record (3) in the Strawweight division. She submitted Michelle Waterson and equaled Ronda Rousey’s record at UFC on Fox: Johnson vs Reis in 2017. Earlier she used the rear-naked choke to devastating effect against Paige VanZant and applied a standing variation of the hold to Angela Hill. The latter was her maiden UFC triumph. 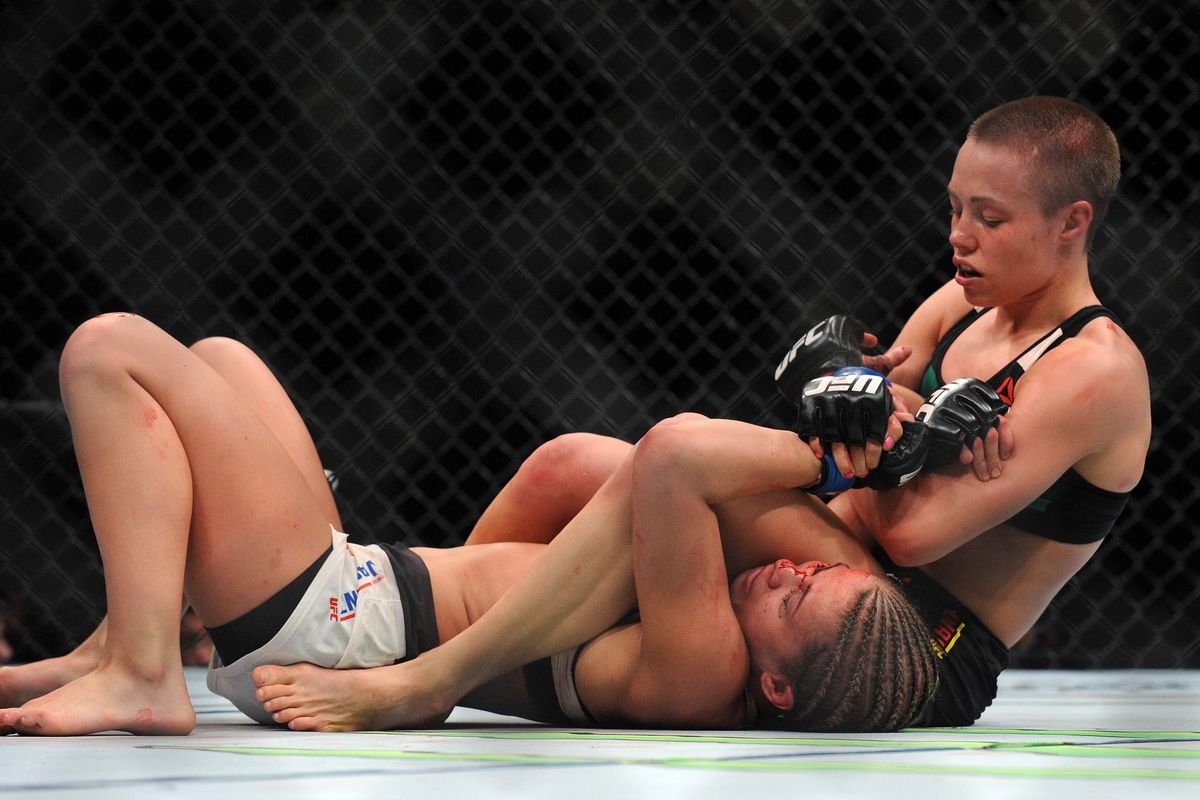 ‘Thug Rose’ and ‘Rowdy’ were overtaken at the UFC on ESPN: Blaydes vs Volkov event. On the night, Flyweight fighter Gillian Robertson earned a 4th submission win in the UFC.

Namajunas will look to tie the number once more at UFC 251. By doing so she would avenge her Championship loss against Jessica Andrade.