Though he wasn’t a part of the commentary team, Dominick Reyes didn’t shy away from providing his inputs throughout the main event of UFC Vegas 8.

Dominick Reyes is the current no.1 contender for the UFC light heavyweight title. He will take on Jan Blachowicz next for the title after Jon Jones vacated it to peruse his heavyweight dreams.

UFC Vegas 8 had Aleksandar Rakic take on Anthony Smith at the main event in a light heavyweight clash. Live-tweeting throughout the main event, Reyes called the main event “lame” and provided constant feedback as the fight continued.

The main event was a one-sided affair. Rakic punished Smith throughout the fight and destroyed Smith’s legs, to say the least. He even took the fight down to the mat and dominated it down there. 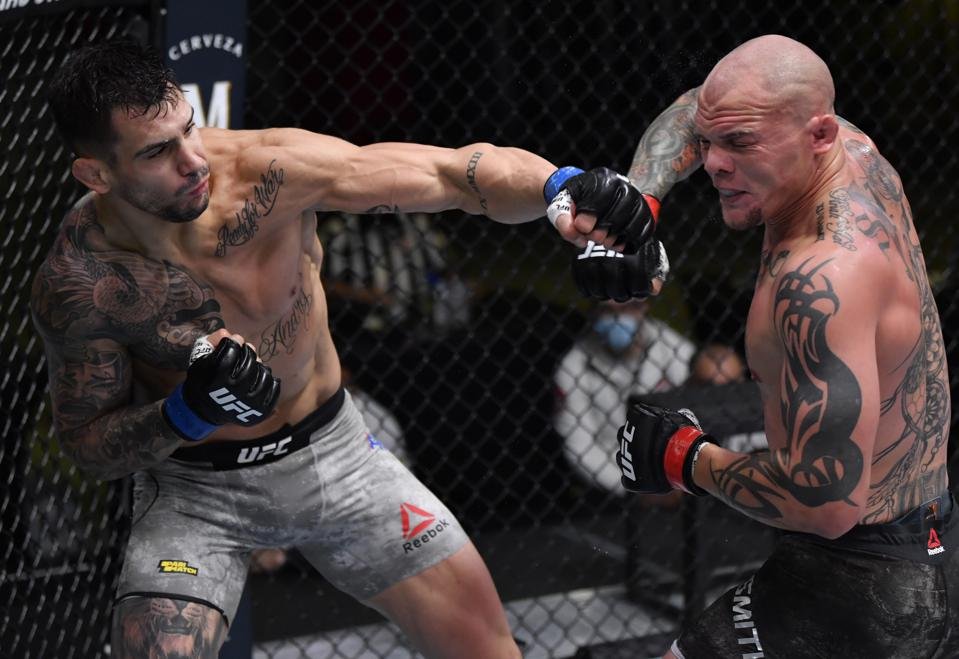 Dominick Reyes lays it all down

At the end of the three rounds, the fight was scored at 30-27, 30-27, and 30-26 all in favor of Rakic. Reyes was supposedly not even aware of the fact that the main event was a three round bout and was surprised when he found out.

I've seen that chest tat on quite a few females. JS 🤷🏽‍♂️

He let out comments like, “Not the greatest Fight IQ should prolly break and smash him, But what do I know!” He even targeted Anthony Smith in particular and said, “The ol ball up on the ground technique.”

At the end of the main event, he called it “lame” and even sighed at the contest and said, “Welp that uneventful #UFCVegas8.”

The 30-year-old will take on Blachowicz at UFC 253 for the division’s title. This match was fixed because of Jones moving on to heavyweight and leaving the belt vacant. Initially scheduled to take on Jones, Blachowicz will now have to beat Reyes to get a hold of the title.

Who do you think will be the new light heavyweight champion at the end of UFC 253?