Dustin Poirier met a pleasant surprise at the weigh-ins for UFC on ESPN 12. The former Interim Lightweight champion will become the inaugural awardee of the Forrest Griffin Community Award.

As the name suggests, the award tends to recognize and award fighters who choose to give back to society.

Immediately after the weigh-ins for his upcoming fight, UFC announced that Dustin will receive the award. Even though this came as a surprise, Poirier had some great insights to share. In an interview with Jon Anik from ESPN, Poirier said,

“I’m just grateful, man. I really am. Life goes on and great things happen. Thank you guys so much for everything- For spreading the word, for helping me get this out there and touching so many people with this platform.”

UFC President Dana White personally picks the recipient of the award. Thus, he most definitely had some great things to say about Poirier after the announcement. He said,

“Dustin is a great athlete. But more importantly, he’s a great human being. He is a kid who works hard and is passionate about giving back to not only his community but [also] to those who are less fortunate.”

Forrest Griffin, the Light Heavyweight veteran after whom the award is named, said,

“I’m so happy people like him are in the sport. He’s such a good person and such a good representative of the sport. As he looks back in his life this is something he can reflect on and be proud of. I couldn’t ask for a better spokesperson and leader to start off the award’s legacy.” [quotes from UFC.com]

Dustin Poirier started his venture into goodwill by launching the ‘Good Fight‘, a non-profitable organization along with his wife, Jolie Poirier.

Poirier experienced the joy of being around children after he met his firstborn, Parker Noelle Poirier. Thence began his journey into attempting to bring happiness to all faces.

After its commencement in 2018, Good Fight has accomplished various milestones in the short period of its existence. 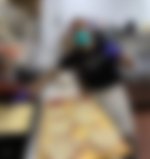 Ranging from food drives to creating shelters, educational campaigns, and campaigns for job opportunities, the Good Fight has invested its efforts wherever possible.

The organization follows an approach which not typically aimed at serving those belonging to a specific community. Instead, Poirier reaches out to anyone and everyone in need that his hands can reach.

Bringing out his inner ‘Diamond’, Poirier doesn’t dwell on fighting souvenirs or apparel to keep on the mantelpiece. Instead, he auctions off his fight-possessions to donate and take care of the well being of those who are unfortunate enough to live a life much much less spectacular to his. For example, families of fallen heroes of law enforcement.

The story of Aaron Hill

One such story of the positivity that the organization aims to spread is that of 7-year-old Aaron Hill.

The hearty young boy met with a terrible illness which was terminal in nature. Gradually, Aaron lost his ability to walk or speak.

However, what he did not lose was the innocence and enormous heart that he had. Thus, when it came time for him to ask for anything he wanted, any wish he had, he surprised Poirier with his kindness.

Aaron’s selflessness moved Poirier to such an extent that the latter still tears up while speaking about it.

After his fight with Max Holloway, Poirier immediately auctioned off his gear and worked towards making the playground ready.

Poirier does truly and richly deserve recognition for the passion with which he aims to give back to the world. While ‘Diamond’ does capitalize his entire persona, ranging from his toughness as a fighter to the human he is inside, ‘Diamond-Hearted’ is something that he has proven himself as.