In Today’s world, watching women fight inside the octagon may not be a big deal. But, for some people, women engaging in combat sports is not acceptable. Khabib Nurmagomedov is one of them. Cynthia Calvillo – who is Khabib’s teammate at AKA, describes her experience training alongside the lightweight champion.

Cynthia Calvillo holds a record of 8-1-1, 0NC and competes in the UFC women’s strawweight division. She is considered one of the top prospects in the game. Calvillo trains under Javier Mendez at AKA in San José, California. The gym his home to many great UFC champions, including Khabib Nurmagomedov.

Training with one of the best in the world sounds like a good idea, right?

Well, Calvillo does not train with Khabib or other male fighters of the Islamic faith. It is not only Calvillo but all the women fighters at AKA do not train with the ‘Eagle’ and his unit because of their religious beliefs. On numerous occasions, Khabib has stated that women should not be competing inside the octagon.

Cynthia Calvillo is unhindered by Khabib Nurmagomedov and his beliefs

“It’s a little bit weird because of their religion and stuff…They don’t talk to women you know. I mean we say ‘hi’ to each other but we can’t train with them. They won’t train with women.” Calvillo told theScoreMMA. However, Khabib’s decision to refrain from training with women does not stop Calvillo from learning new techniques from the Dagestani born fighter.

“I get to see it. A lot of time, he’s grappling there. He’s showing technique and stuff like that… It’s not like I don’t get to learn stuff. I still get to watch it and learn but I don’t physically train with him or any other guy. I don’t think any other woman does.”

She then referenced Islam Makhachev’s comments on Joanna Jedrzejczyk vs Zhang Weili. Makachev—like Khabib—is also a hardcore follower of Islam. Last month, Makhachev made an interesting comment on Women’s MMA on Twitter. 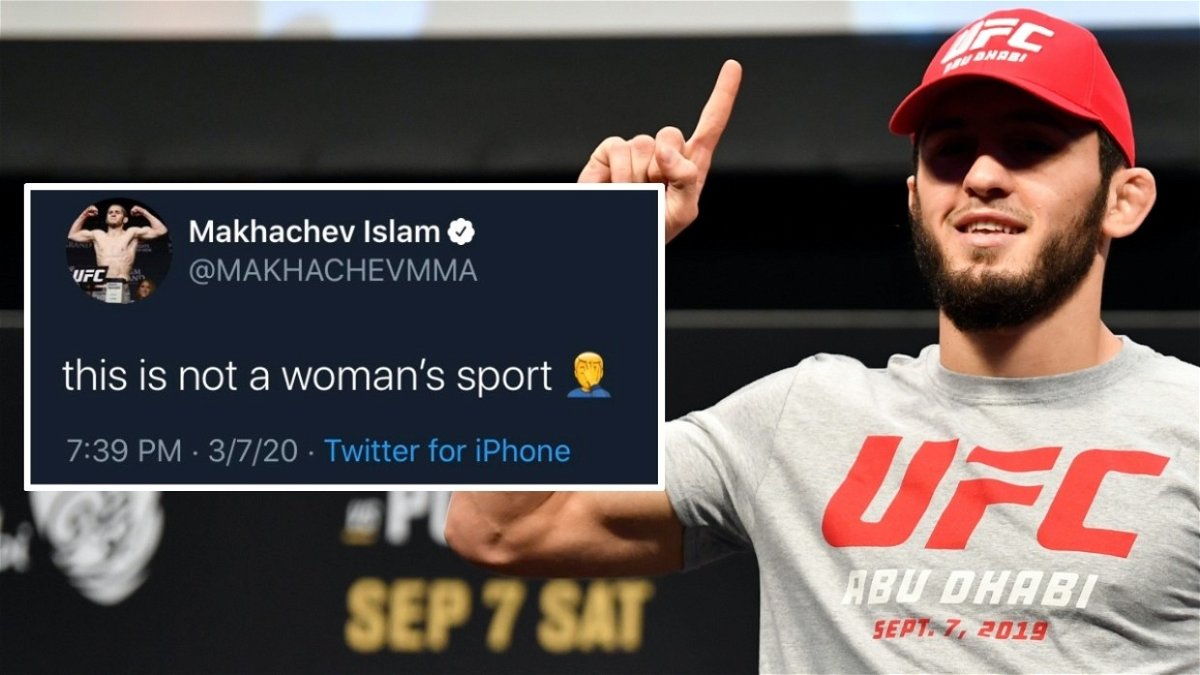 However, Calvillo does not hold any disdain towards Makhachev. The champion had also made similar comments before.

Calvillo does not blame Khabib or his friends

“I cannot get mad or judge anybody else based on how they were raised. They don’t go out of their way to be rude. I don’t get kicked out of the gym. They don’t have an issue with me training along with them, they’re fine. They’re respectful.”

Champions like Georges St-Pierre and Fedor Emelianenko share the same beliefs as Khabib. But, Khabib and the others still hold a mutual relationship with the women at the gym. They even exchange fist bumps and treat the women respectfully.

For a long time, women did not compete in the UFC. It took stars like Ronda Rousey to build up women’s division in the company. Over the years, women have put some of the best performances in history. Fighters like Valentina Shevchenko and Amanda Nunes are more skilled than many male fighters on the roster.