Miami Open 2020 to Be Canceled as Novak Djokovic Raises Concerns

Tyron Woodley has had his fair share of criticism from the top brass of UFC because of his “very little efforts” in title defenses.

Thus, when Israel Adesanya was let off the hook citing a “defensive strategy”, Woodley made it a point to call out those who ridiculed him for employing similar strategies in the past.

Post the controversial main event of UFC 248, Ariel Helwani shared an Instagram post with Adesanya’s quotes, which consisted of comments made by New Zealand fighter after the match.

“The Chosen One” immediately responded, making Joe Rogan his prime target. He stated,

“Funny how no one got into Rogan’s earpiece. And let him know he (Adesanya) broke the record for (the) least amount of strikes thrown in a title fight. No shi***ng on their Prima Donna. Just excuses and exceptions. How convenient.”

Yes, in what was meant to be a fight to remember, Israel Adesanya broke the record for the least strikes thrown in a title match. The record was previously held by Woodley, who was heavily disgraced by commentators for his fighting methods.

How deep is the beef between Tyron Woodley and UFC?

Woodley had faced trouble with the UFC for his duration as the reigning champion. Dana White, the President of the UFC, had thrashed Woodley publicly on various occasions for not providing the fans with the kind of fights they want to see.

The two even had altercations in media events. Woodley has time and again raised formal complaints directed at Dana and Joe Rogan. 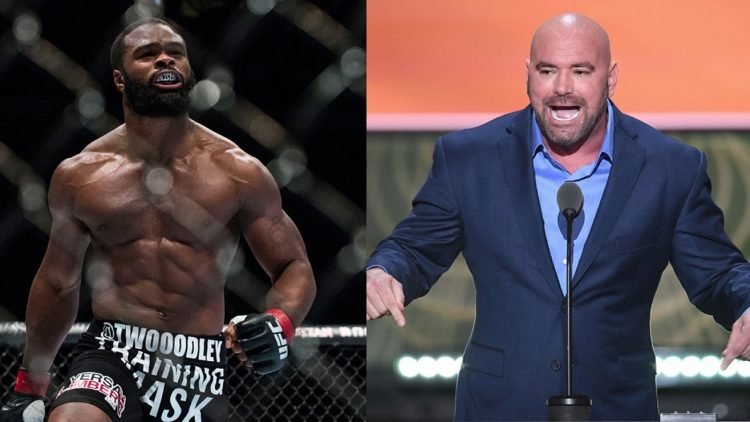 The American fighter believes that the UFC has been unjust to him. The fight between Adesanya and Romero was similar to Woodley’s bouts with Demian Maia and Stephen Thompson. Yet the UFC management termed him as “undeserving” instead of acknowledging for his “smartness” like Adesanya.

However, Woodley has to concentrate on the job at hand and ensure that his beef with the commentators does not sideline his fighting career. He is focusing his energy on his next fight with Leon Edwards at UFC London on 21 March.