Marvel vs DC MMA: Who Wins?

The never-ending debate of Marvel vs DC just took on a whole new spin! MMA media member Michael Morgan recently shared a video wherein fighters in superhero costumes took each other on.

The interesting thing about the fight was the specific costumes. Of the three fighters on the platform, one represented Spiderman. On the other hand, the remaining two represented Batman and his sidekick, Robin.

Therefore, we had ourselves a two-on-one Marvel vs DC Classic.

How did the fight progress?

While team DC most definitely outnumbered team Marvel, Spiderman did not seem to have a hard time controlling the fight. He seemed to be the heaviest and most experienced contender of the three.

He squashed the attempts made by Robin pretty easily. In fact, it seemed as though Spiderman’s spider-sense helped him quite a bit.

This was evident when he was dodging punches from one opponent while kicking the other, indicating maximum mental presence inside the Octagon.

I’ve covered MMA for the last 11 years. I’ve been to some incredible events, experienced some amazing scenes. My one regret was swerving this one… pic.twitter.com/pMGJMDnO1X

He started off by throwing fists at Robin, who staggered and fell back. Meanwhile, Batman engaged with a strike that widely missed his target. Spiderman engaged in a Muay Thai clinch and unleashed devastating knees to the head of the ‘Caped Crusader’.

He kept Batman under his control during the clinch, keeping him between himself and Robin so as to avoid a second attacker simultaneously. He let Batman off, and as soon as he did, Robin re-engaged while Batman fell back. 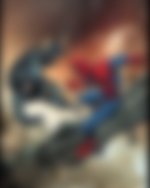 However, Robin met the same fate as Spiderman landed devastating strikes consisting of fists and legs right to his head.

What is the ideal Marvel vs DC MMA fight?

While the fight above was not exactly ideal, a surreal real-life Marvel vs DC experience could be an emotional roller-coaster.

This is because both Universes consist of superheroes that use master-level MMA to fight crime.

On the same nerve, while Batman did not seem all that impressive in the above fight, he is The Dark Knight. An MMA fight between the member of the League of Shadows and the First Avenger, Captain America, would be a banger no one knew they needed.

Both expert martial artists with special equipment of their own are bound to deliver a complete slug-fest.

Which Marvel vs DC MMA fight would you like to see?