Conor McGregor is making sure that people receive their share of entertainment and analysis during times of scant UFC action. In most forms of sports, the GOAT conversation is an evergreen topic of debate.

McGregor has given his hot take on how he ranks the pantheon of all-time UFC greats. Characteristic of his bold words, Conor has decided not to place George St-Pierre on first, and not even on second, on the list.

McGregor started his “GOAT thread ” a few hours back on Twitter. The Irish fighter didn’t simply give out a ranking that was devoid of any context or basis. He supplemented it with facts and opinions to justify each position.

Given the erratic nature of some of his tweets, speculating that he’d place himself on top wouldn’t be far-fetched. However, McGregor placed himself second giving Anderson Silva the top spot. 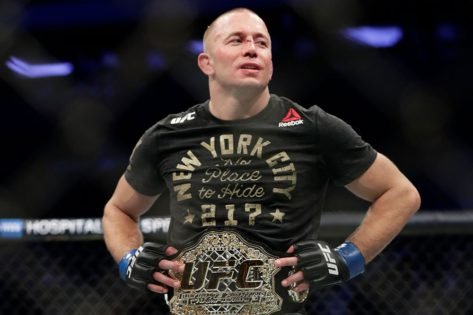 Many would argue that George St-Pierre would have the biggest claim for the No. 1 spot. Instead, “The Notorious One” placed him right underneath himself on the 3rd spot. And the gap isn’t even close between the two positions.

GSP is in at 3. Much less array of finishes but champion status in 2. He is far behind though. Reasons = Left 170 after much damage taken+questionable decision. Never re-engaged 170lb successors. Bottled Anderson fight. Only moved when one eyed fighter presented. Played safe.

McGregor held GSP accountable for several reasons. He criticized him for not moving up a division and fighting Anderson Silva. It is interesting to look back and see that the primes of two of the greatest fighters in UFC history coincided with each other. Moreover, their weight divisions were just 15-pounds apart.

When one takes into account how often fighters switch weight classes these days, it is very normal to wonder why Silva never faced GSP. The prime reason for it is GSP’s unwillingness to move up a weight class.

In the bigger picture, people criticize GSP for playing it safe. He left the welterweight division after his closest win against Johny Hendricks.

Eventually, he did move up to middleweight when Michael Bisping was the champ. After just a single fight following his return, St-Pierre hung up his gloves. However, despite all this Conor still has him ahead of Jon Jones, who sits at No. 4 on his GOAT list.

One more on George/Jon decision that will clear why I originally gave George 3 and Jon 4 before a maybe tied 3. A lot of Jons opponents were Anderson’s 185lb opponents but the array of stoppages where not there, or nowhere near Anderson’s despite the weight advantage to do so.

Out of the four people that completed Conor’s GOAT thread, two are still active. Consequently, McGregor is open to changes to the list in the future.

A major factor that influenced Conor’s list is how well fighters have translated their skills across different weight classes. This is probably why he didn’t even mention his arch-rival Khabib Nuramgomedov on the list.

Conor also addressed the asterisk that is put in front of certain fighter’s achievements due to the use of performance-enhancing drugs. However, it doesn’t look like the factor has affected the list a lot.

If someone objectively takes into account the use of PEDs, George St-Pierre has arguably the biggest claim to the MMA GOAT status.