Petr Yan will compete for the vacant Bantamweight Championship at UFC 251 against Jose Aldo. His enthusiasm was on display ever since the UFC announced the bout. However, he has had to spend time dealing with fellow divisional fighter Sean O’Malley, who has shared his opinion on the Russian, thereby triggering an entertaining social media war.

The 3rd ranked Bantamweight contender took to social media to highlight his experience over the 25-year-old. He wrote, “I did boxing for 8 years and during that time I’ve beat up as many lanky long dudes as you have hairs on your head curly boy. Use your long arms to stick it up right into your a**hole. Your reach will be useful only for that (Sean O’Malley)”

I did boxing for 8 years and during that time I’ve beat up as many lanky long dudes as you have hairs on your head curly boy. Use your long arms to stick it up right into your asshole. Your reach will be useful only for that @SugaSeanMMA

The tweet came after days of silence from both fighters. A few days ago, Yan branded ‘Sugar’ as “Kukla Boy.” Furthermore, he said that the rising contender is trying to be Conor McGregor.

It all began when ‘Sugar’ hit out at ‘No Mercy’ following a tweet where he said, “My time!” In response, O’Malley replied, “Calm down, you can’t even spell your name right, Peter.”

‘Sugar’ directs his attacks to the Russian fighter’s height. Meanwhile, ‘No Mercy’ continues to mock the youngster’s eye-catching hairdo. On June 13, he commented, “You are working for me now curly boi.”

You are working for me now curly boi 👌🏻 https://t.co/NpYDNaQpvE

Also, earlier today, he hit back at O’Malley, claiming to make “Lil dudes snore.” In the tweet, he asked ‘Sugar’ to “shave his rainbow curls” and “shut up and stay protected by the UFC.”

Shave your rainbow curls before I will even consider to fight you poodle. For now shut up and stay protected by ufc 🌈 🐩 https://t.co/QGC0c8hJsk

O’Malley has made a comeback to the UFC after 2 years out. At UFC 250 he put in a stunning walk-off KO against Eddie Wineland. Ever since then the fighter’s stock has soared and he is expressing supreme confidence in engaging with a Championship contender 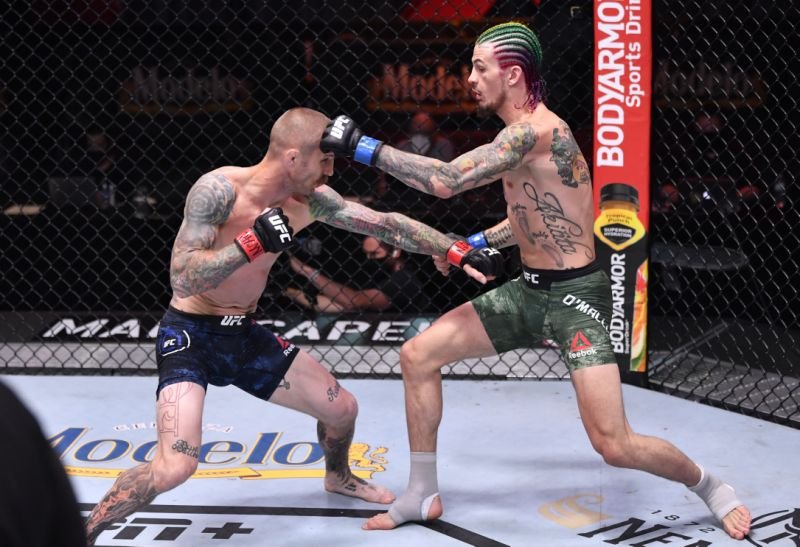 Does ‘No Mercy’ have a point in labeling him as a McGregor wannabe? The banter is undoubtedly fun for netizens and can be used if the UFC ever decides to book a fight between the two.

What do you make of Petr Yan’s comments on Sean O’Malley’s boxing and reach?

“I Will Sit on The Bantamweight Throne!”- Aljamain Sterling