In a few hours, the UFC will host its first event on Fight Island. The card is stacked from the top to the bottom. The main card features three title fights, which include: Jorge Masvidal vs Kamaru Usman, Alexander Volkanovski vs Max Holloway, and Jose Aldo vs Petr Yan.

This article will break down the first title fight of the night – Aldo vs Yan (for the bantamweight championship).

Yan has a record of 14-1. The Russian fighter joined the UFC in 2018. He has six wins in the company so far, and three of them came via stoppages. As of now, he is on a nine-fight win streak. “No Mercy” defeated veteran Urijah Faber in his last match. Besides that, he has victories over top contenders like Jimmy Rivera and John Dodson. 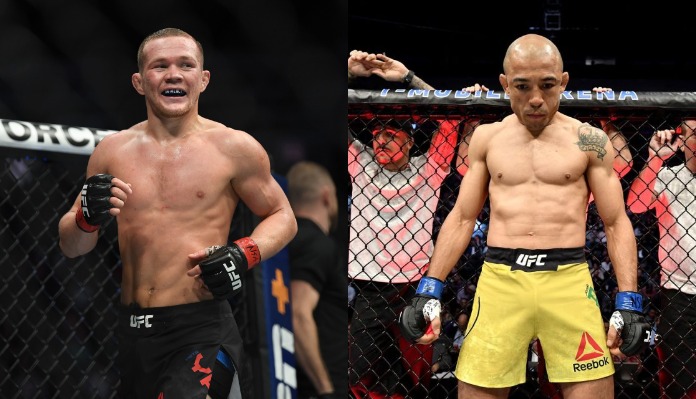 Aldo (28-6) needs no introduction. The Brazilian has achieved legendary status inside and outside the UFC. Before his match with Conor McGregor, Aldo was undefeated for a decade. He has witnessed some ups and downs since then. But he is still a formidable opponent.

Both fighters are excellent strikers. However, the level of competition that both men have faced is different. Aldo has been in the game for a long time. He has fought and defeated some of the best athletes in the UFC. Yan is comparatively new to the sport.

Aldo is perhaps one of the best boxers in the company. His counters are on point. In his last fight, Aldo hit Marlon Moraes with some clean counter shots. Yan is no slouch either. His boxing is underrated. Additionally, the 27-year-old carries brutal power in his hands.

Since Aldo has had only one match at bantamweight, it is unclear whether he can deliver the same power as he did at featherweight. He will have a speed advantage over Yan. Moreover, he will also have the opportunity — because of Yan’s style — to leg kick his opponent throughout the match.

The bout may never hit the ground as Jose Aldo is the best anti-wrestler in the UFC. And he is extremely difficult to take down. Aldo rarely takes his opponents down. But he is almost unstoppable when he does.

It is difficult to predict who will have a psychological advantage. Yan has been victorious in his last nine outings whereas Aldo is coming off a loss to Moraes. However, it is worth noting that Aldo and Yan have trained together before. According to some reports, Aldo dominated Yan in every position a long time ago.

In his fights with Max Holloway, Aldo has shown that he slows down under high pressure. Expect Yan to do the same. “The King of Rio” will start strong and probably win the first two rounds. However, Yan will pick up the pace after the second round and land clean shots on Aldo. Eventually, Yan’s power will be too much for Aldo to handle.