UFC veteran Josh Emmett made a startling revelation during his post-fight conference. Emmet secured a decision victory over Shane Burgos.

Both men got into the swing of things early on and started throwing heavy shots from the very first minute. Emmett’s pace caused Burgos a lot of issues, but a series of devastating calf kicks threw Emmet off balance.

During his post-fight conference, Emmett revealed he had hyperextended his knee during the first 15 seconds of the fight. As a result of this, the veteran had to dig deep to secure the decision victory.

"I blew my ACL in the first 15 seconds, had to dig deep again!" – @JoshEmmettUFC

“All you guys, all the journalists counting me out I see all your guys’ stuff you guys have no idea what I’m capable of I blew my ACL first 15 seconds. I had to dig deep again.

“You guys always count me out. I’m gonna stop doing interviews with you guys cause you guys always doubt me. Power first vs precision. I guess the power won this tonight,” said Emmett.

Emmett fired back at the MMA media community after several journalists counted him out against Burgos. Despite, the criticism, Emmett showed true heart and desire during the fight.

Josh Emmett rushed Burgos in the second round. Both fighters exchanged plenty of near fight-ending shots, but their durability and toughness was the highlight in this dog fight. 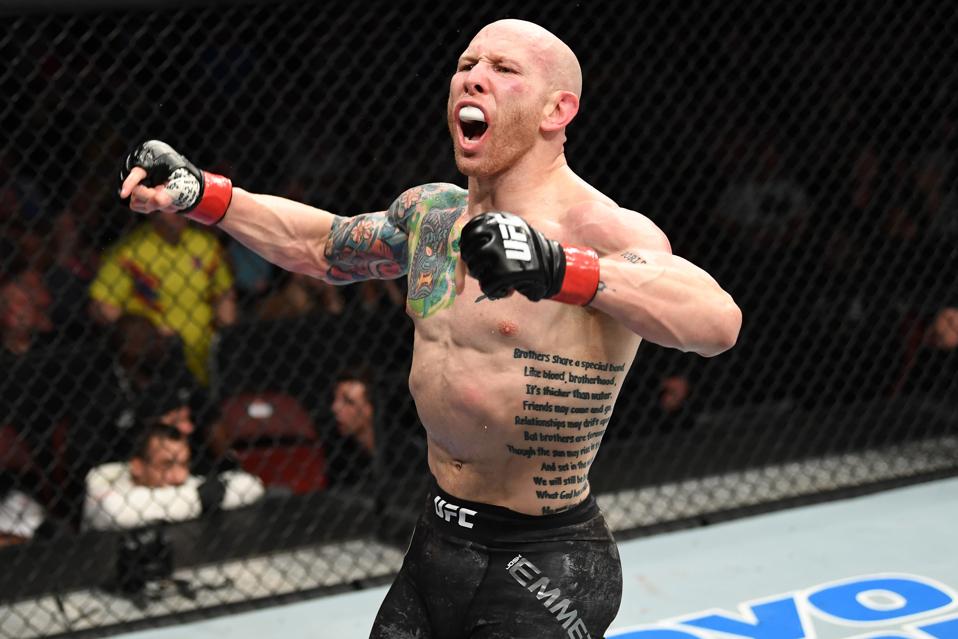 Burgos absorbed a devastating shot in the final round and was rocked. However, he caught Emmett with a painful groin shot and the fighters had to stop for a couple of seconds.

Almost immediately after the time out, Emmett caught Burgos with another solid shot and rocked him yet again. Emmett threw a series of powerful punches after that. However, Burgos absorbed the damage.

Emmett won the fight by decision with the judges scoring the contest, (29-28,29-28,29-27). Josh revealed after the fight, that his only goal is to win the featherweight title.

What are your thoughts on the fight? Let us know in the comments below!