Kay Hansen announced her arrival in the UFC in style with an impressive submission. The 20-year-old beat fellow UFC debutant Jinh Yu Frey via a stunning armbar submission. Her effort drew praise from the first-ever women’s Hall of Fame inductee, Ronda Rousey, which only serves to highlight how impressive the performance was.

All of that is surely worth it considering her victory. The 20-year-old will no doubt be overjoyed when she sees the praise by Ronda Rousey. The ‘Rowdy’ one tweeted, “Congratulations. looking forward to seeing more from you! Nice armbar.”

Despite having a decade and a half on Hansen, Yu Frey headed into the bout with no experience of competing at this weight. This is because the 35-year-old spent her entire 7-year career at Atomweight. Unfortunately, the UFC does not cater to Atomweight fighters, which forced her to move up a weight class.

Hansen commenced the fight looking for a cinch. In going for this she paid the price and ate an elbow shot. The 20-year-old kept attempting a takedown to capitalize on her strength. She claimed 3 of her 5 wins at Invicta via submission.

Akin to Rousey, Hansen too attempted Judo throws to combat her opponent. However, they weren’t effective as she left herself to immune to kicks. 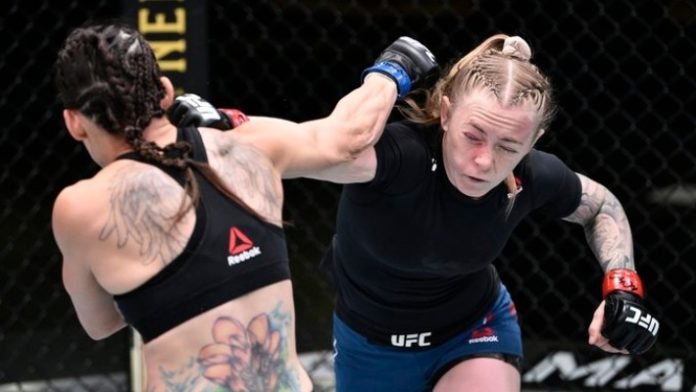 In round 2, the youngster finally succeeded in taking the fight to the floor. Here she did her best to get in position for a submission but was held off. Hence, she resorted to ground and pound to cause damage to her opponent. In round 3, Hansen finally latched onto her prey and ended up getting into a prime position to end the fight.

What did you make of the young prospects UFC debut? Praise from Ronda Rousey will certainly excite fans and paint a huge target on Hansen’s back as she continues on her UFC journey.