The year 2015 has come to an end. Every sport has had it’s share of superstars who have captured the eye of the world, and made it their year. They have been unbelievably good, breaking quite a few records on their way to unprecedented success. Domination has been almost complete and probably no one has come close to being so good.  Novak Djokovic, Serena Williams, Jamie Vardy, AB de Villiers, Carolina Marin, Lionel Messi, Stephen Curry and Steve Smith are a few names that belong to this category.

But as always in sport, 2015 has had it’s share of unsung performers. Their contribution to their sports and teams has been immense. Though unsung, they have played vital parts in their team’s success, in the success of a tournament, in pushing their rivals to their limits. These are the athletes that have had an equally important role in making 2015 the wonderful sporting year it has been. These are the athletes that EssentiallySports thinks deserve equal applause. These are the Unsung Performers of 2015. 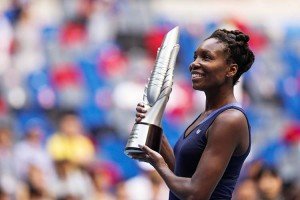 After her career went tumbling down in 2011 due to persisting injuries and serious health issues, the former world number 1, Venus Williams came back in the picture in 2014, reinvigorated her A-game to revive her career in 2015. She earned the WTA Comeback of the year award and became the oldest player, at 35, to be ranked inside the top 10 for two consecutive years. Her achievements may not top those of her younger sister this year, but her resurgence to the top form is highly respectable. According to the WTA’s website, Williams was the 10th most popular player of 2015.

Venus started off the season by winning her 46 career singles title at the 2015 ASB Classic in Auckland by defeating Caroline Wozniacki in three sets. She next made it to the last eight at the Australian Open, marking the first time she got to a quarterfinal stage at a Grand Slam event after the 2010 US Open. She also made it to the quarterfinals of Miami Open.

After a brief stint at Wimbledon, Williams started off well at the Wuhan Open, defeating Agnieszka Radwańska in the first round and Julia Görges in the second round to bring about her 700th career win and becoming only the ninth woman in the Open Era to do so. She finally beat the world no. 8 Garbiñe Muguruza to seal her most important victory of the year.

She wrapped up the year by capturing the WTA Elite Trophy by beating Karolina Pliskova 7-5 7-6, taking the toll to 48 singles career titles and her year end ranking to 7. 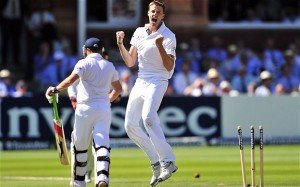 Morne Morkel has been accused of not stepping up to the occasion and squandering his limitless talent. With his height he can generate a bounce that most batsman find difficult to maneuver but ever since Vernon Philander was given the new ball instead of him to partner Dale Steyn Morkel had lost a bit of his venom. But it was this year that he finally came of age. The most recent example is the series against India where he was the spearhead of the attack for the last two tests and decimated the Indian batting lineup on his own.

In Nagpur on a surface that was slow and dry, he was clearly the standout bowler between both sides. The other thing that was impressive about him was how he was always guiding the younger bowlers like Rabada and Abbott, constantly talking to them and never leaving them bereft of ideas. With the injury clout over Steyn and his uncertain future, Morkel might have to play a bigger role in the future and if this year is anything to go by then he is clearly up for the responsibility. He doesn’t always need to be in the limelight but being the unsung performer he is, always gets the job done. 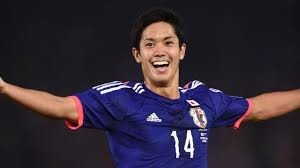 The young Japanese forward signed for Mainz 05 in may 2015, rejecting a possible move to Chelsea in search of first team action. And boy was that a good decision by the youngster. The centre-forward has been flying in the Bundesliga and has scored 7 goals in 12 games. The forward also provided two great assists and creates many clear cut chances game after game. The relatively new and unknown Japanese footballer scored a mesmerising hat-trick against Augsburg in a 3-3 draw. The talented forward can also be deployed in the midfield as a winger or attacking midfielder, and has on many occasion played as a winger for the Japanese national squad. Mainz sit at the 8 position in the Bundesliga and have no one but Muto to thank for it. 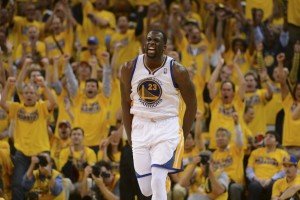 When speaking about the Warriors’ success in 2015, their back-court duo of Steph Curry and Klay Thompson come into the discussion as the leaders for the Warriors success. Some might consider the finals MVP, Andre Iguodala.

Yet one of the most crucial members of the Warriors was their forward, their unsung performer Draymond  Green. After being a fringe player in the first 2 seasons with the Warriors, he rose to prominence under coach Kerr and was one of their most solid, all-round performers. Throughout the 2014/15 season, he averaged 11.7 points, 8.2 rebounds, 3.7 assists, 1.6 steals and 1.3 blocks a game with his career highlight coming in the final game of the 2015 Finals where he recorded a triple double.

He would not stop there. Like the rest of the Warriors squad, they have just improved, with Green being one of the most important players, now contributing 14.6 points, 9 rebounds , 7.1 assists, 1.2 steals and 1.6 blocks a game, showcasing his all round versatility. He has recorded 4 Triple doubles in the season so far.

2014/15 and 2015/16 see him as one of the key members of the Warriors’ small line up, with Green as the center. It’s his ability to guard the rim against players bigger than him and still move fast, which is why the line up works wonder for the Warriors.

It wasn’t a surprise to see him rewarded in the 2015 off-season with a 5 year $82 million contract. He is a future all star and  All-NBA team member. 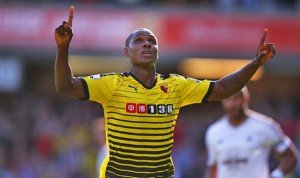 If there’s one player who can be given the credit for Watford’s great start to life in the premiership, it is Ighalo. The Nigerian striker has already netted 14 goals this season from 19 appearances and sits on the 3 spot in the top scorers list, behind Lukaku and Vardy both with 15. Ighalo is a beast on the field and possesses great strength. His spot kicks are accurate and finishes sublime.

Ighalo is great with headers and can convert beautiful goals with his head. Good players score goals but the great players score important ones. And that’s what Ighalo has done, scored important goals against the so-called biggies. He scored a brace against Liverpool and scored important goals against Chelsea, Spurs and Everton. His largely unnoticed performance has caught the eyes of many European scouts and clubs like Atletico Madrid are lining up big budget transfer for the Vicarage Road superstar. 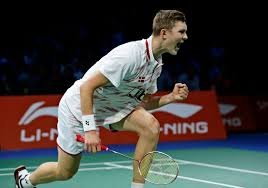 Amidst all the hype and the history making, one name hasn’t been bandied around much. A 21 year old Dane who has been showing all the signs of emulating his legendary countryman Peter Gade. Viktor Axelsen. Rising from 12 in the rankings at the start of the year to 6 at the conclusion of the season, Axelsen has had a year that can be described as “So near yet so far”. He reached the finals of four Super Series events, before faltering at the final hurdle to more experienced or better prepared opponents. His amazing run started at the Swiss Open Grand Prix Gold event, where he reached the final before losing to India’s K.Srikanth,then World No.3 . A somewhat similar story was repeated at the Indian Open Super Series, where he lost to the same opponent again, stretching him to 3 games both times.

His quick movements and deception were at the fore once again, when he reached the finals of the Australian Open, the Japan Open and the World Super Series finals beating higher ranked Jan O Jorgensen, Chou Tien Chen, K.Srikanth and Chen Long enroute the summit clashes. All three times, he only lost closely to the favourites, Lin Dan, Chen Long and Kento Momota. He was a vital part of Denmark’s team in the team events, winning two matches each in the Sudirman Cup and the European Mixed team Championships.

A regular quarter-finalist at most of the other events, Axelsen this 2015 season has been a revelation. With a lack of titles, it would be easy to overlook his year as a great one. He has been an unsung performer throughout the year. But truth to be told, the Dane has been very consistent and fearless. His deception play though a long way to go, reminds us of Peter Gade. And as you would expect from Danish badminton players Viktor Axelsen wears his heart on his sleeve and it’s a delight to watch him play. If 2015 has been any indication, the 2010 Emerging Player of the year will make the next few seasons his. 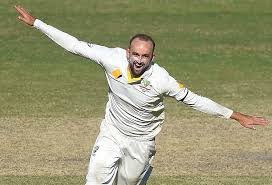 Nathan Lyon started off as a nervous starter in the Aussie XI. He had big shoes to fill with Australia looking at him as their version of Graeme Swann and he had the rich legacy of Shane Warne to look up to. His predecessor Nathan Hauritz had not done a totally bad job either before his controversial ouster and the likes of Michael Beer and Xavier Doherty were breathing down his beck. Many in Australia considered Steven O’Keefe to be a better bowler.

But Lyon worked at his craft and became better with every game. He was always getting there but in 2015 he came into his own. He is 5 on the list of highest wicket takers in Tests this year and more importantly he chipped in at important moments. Every time his captain threw the ball to him, he delivered. Be it breaking partnerships or slowing up the proceedings or just creating pressure from one end for the quicks to do their thing, Lyon was always in the game. He will never be talked about as much as Smith or Clarke, he might not have the mojo of Johnson or Stark but he’s effective, mighty effective. 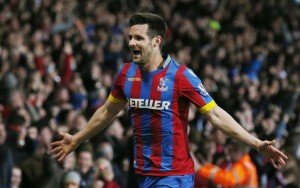 Scott Dann quiet possibly is the best uncapped defender in England. The Crystal Palace defender has been consistent the two seasons he has played for them. Palace boast the second best defense in the premiership this season and have conceded just 16 goals in 19 games. A lot of their defensive masterclass is because of Dann. He was given the player of the year award last year by Palace but was still not selected for the three lions squad for the Euro 2016 by national coach Roy Hodgson.

Dann has a strong presence on the field and is second to none in air duels. The centre-back has been praised by his manager Alan Pardew who accredits a lot of their success this season to Dann. A strong defense has pushed palace up to the 5 position on the EPL table. Dann is one of the top contenders to be in the team of the season in the premier league, yet the England call-up still eludes this unsung performer.