“Wake Me Up When This Is All Over”: Usain Bolt Devastated as Manchester United Get Hammered by Liverpool

Manchester United fans had an unfamiliar outing on Sunday, as Liverpool crushed the Red Devils 5-0. The fans were heartbroken, watching their favorite team failing miserably. One of the United fans who couldn’t handle the loss was the Olympic legend Usain Bolt.

Notably, Usain Bolt is one of the biggest Manchester United and Cristiano Ronaldo fans. Like most United fans, Bolt also expressed his sadness on Twitter during the match.

Eight-time Olympic medalist Bolt was constantly tweeting about his misery as he watched his favorite team being crushed. Remarkably, within the first five minutes of the match, Naby Keita had scored a dazzling goal to give Liverpool the lead. However, the rain of goals did not stop there, as Diogo Jota scored another goal in the 13th minute.

Liverpool’s dominating start wasn’t great for the United fans, as the hopes of winning were fading away. Reacting to the poor start, Bolt tweeted saying, “Wake me up when this is over.” Followed by, “The misery continues.”

Wake me up when this is all over

And, then came Mohamed Salah, who astonishingly, clinched three goals for the Liverpool team. Olympic medalist and Liverpool fan Wayde van Niekerk, tweeted tagging Bolt,” Reminds me of a Usain Bolt record-breaking race ‘we want more.'” Bolt replied to him saying, “You not being nice now.”

Notably, for the first time in the Premier League era, United were down by 4-0 at half-time. Sprinting legend then tweeted, “It’s gonna be a long day.”

It’s gonna be a long day

It was the worst defeat Manchester United had ever faced by Liverpool at Old Trafford since 1895.

The world’s fastest man had tried his hands at soccer after retiring from track and field. Interestingly, Bolt always had the desire to compete for his favorite team, Manchester United. While his soccer career did not work out, his love for the sport and team is incredible. 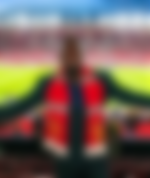 After their horrifying defeat against Liverpool, United will now face Tottenham Hotspur FC. Do you think United will give Bolt and other fans a reason for celebration?

Shreya Verma is a US Sports writer at EssentiallySports. A post-graduation student in political science, Shreya is also a professional 10m air pistol shooter. Taking after her athlete father, she was naturally inclined towards the athletic life.
ARTICLES BY AUTHOR