WATCH: US Olympic Medalist Shares a Heartwarming Moment With Her “Fur-Baby” at Airport

The feeling of coming home after an eventful adventure such as the Olympics is inexplicable. To be at the level of the Olympics, athletes make many sacrifices, and being away from home either for training or the competition is one of them. While the American bobsledder, Kaillie Humphries, was performing spectacularly in the Beijing Winter Olympics 2022, a cute little family member was eagerly waiting for her return.

The 36-year-old Canadian turned American brought home a gold medal from Beijing in the inaugural Monobob event. She became the first athlete to win an Olympic gold medal in the sport. Overall, the bobsledder has won four Olympic medals, three of which are gold medals. While returning home from Beijing, Kaillie received the most heartwarming welcome.

Her beloved dog ‘Duchess’ greeted the three-time Olympic gold medalist, Kaillie Humphries, at the airport. She was so happy and ran straight to her as she cuddled her in her arms. Kaillie has shared the video of this heart melting meet up on her twitter handle with the caption, “My fur-baby. She’s the best dog. I missed her so much while I was away….. and it seems she missed me too. “🥰

‘Duchess’ is a 5-year-old golden doodle who was cheering for the bobsledder in the Olympics. For the finals, the ‘Duchess’ was dressed in US colors and watched the game from home. 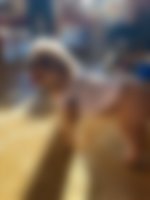 Perhaps she was telling Kaillie at the airport how amazing she was in the Olympics.

Kaillie Humphries’ Olympic journey began with team Canada in Turin Games 2006 and prior to winning an Olympic gold for America, the champion bobsledder has won two gold medals representing team Canada in the Olympics.

However, in 2019, she became an American citizen after a conflict with Canadian bobsled federation on alleged abuse.

“I had a 1% chance of getting citizenship in time and making it happen. But I had to believe in that 1% chance,” she said after winning the gold medal at Beijing.

Well, the truth is she is a remarkable athlete and her Olympic medals are the proof that any country would be proud to have her as its citizen.