“All These Veins Started Coming Out”: Sylvester Stallone Tore His Entire Pec Off in a Horrifying Injury After Training With Arnold Schwarzenegger’s Best Friend and Former Mr. Universe During Rocky II Training

Sylvester Stallone is one of Hollywood’s most prolific performers who made a name for himself in the mid-1970s with a series of action and sport-based movies like Rambo and Rocky. His rivalry with Arnold Schwarzenegger, another action movie star and bodybuilding legend, is quite popular. It was during their bittersweet rivalry that Stallone got to know Schwarzenegger’s friend and another Mr. Olympia winner, Franco Columbo. A silly contest between Columbo and Stallone during one of their training sessions is what caused Stallone a severe injury. The indelible marks of that injury are with him forever, although he found a way to camouflage it. Let’s find out how.

Sylvester Stallone may have been an action movie star in Hollywood, but after his acquaintance with Schwarzenegger, he lived a thorough bodybuilder’s lifestyle. After he met Franco Columbo, the Italian champion became his trainer for Rocky II. It was during this training session that Columbo suggested a bench-pressing contest between the two. It left Stallone with a terrible injury and a permanent mark.

The gruesome reason Sylvester Stallone got his pectoral tattoos

In a YouTube clip from ‘Nick’s Strength and Power’, Nick Miller explains how the injury left Stallone with permanent marks until he found a way to hide them permanently – Tattoos. In the clip, Stallone addressed a question about his tattoos and gave a detailed answer that covered the origin of his injuries and covered them with tattoos.

Sylvester Stallone says in the clip, “Why the tattoo? Well a long time ago, I was training with Franco Columbo, who was Mr. Universe, for Rocky II. We got into this bench pressing competition and I tore my entire pec off”. He said that required 60 stitches, however, it posed another problem. He continued, “But they did it in a twisted way, so it didn’t show until maybe 10 years later that all these veins started coming out……... I decided just to have it covered and kind of camouflage it…”

Stallone admits that it was just the origin and reason behind his first tattoos on his pectoral muscles. But one thing led to another, and now he has several on his chest. He also cheekily mentions that it was Columbo’s idea to start the bench-pressing contest between the two.

The veins were quite rough looking. With close attention, one could also see those injury marks in the Rocky Balboa film.

Stallone was living the Bodybuilding life in the 70s, and his upcoming projects

In the clip, Nick Miller mentioned that when Columbo was training Stallone for Rocky II, Stallone was living and training in Gold Gym Venice, often called the Mecca of bodybuilding. During the bench-pressing contest, they were benching around 385 and 400 pounds. They worked out till there, and when Stallone crossed that limit, he tore his right pectoral muscle. 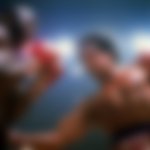 Sylvester Stallone finally has his tattoos that serve a dual purpose, and he is all healthy and fit at age 76. He was last seen in the movie ‘Samaritan’, directed by Julius Avery, and will be next seen in Guardians of the Galaxy Vol. 3 and Expendables 4. Let us know which movie are you most excited to see Stallone in.

Tanmay Roy is a US Sports author for EssentiallySports. He has done MBA and B.Tech in Civil Engineering.
ARTICLES BY AUTHOR