PHOTO: ‘Bigger Than Human Size’- Lithuania University Made One of the Biggest Chess Sets Ever

Chess is the metaphorical representation of a war. It’s a game of pride, emotions, and intelligence. Anyone who loves chess would find chess sets to be equally fascinating as well. Notably, people striving for world records and recognition often try to experiment with the size, structure, and looks of chess sets, too.

This is one of the biggest chess sets ever made. The 24 x 24-meter chessboard was designed for Physics Day in Vilnius University, Lithuania, in 2008. pic.twitter.com/N5o4pPjh3D

Organizers at Vilnius University, Lithuania, designed a 24 x 24-meter chessboard to accommodate one of the biggest chess sets ever made. They hosted an event to celebrate World Physics Day, in 2008. Unfortunately, the chess set couldn’t make it into the Guinness Book of World Records, because, even though the pieces were the biggest, it didn’t include the chessboard. 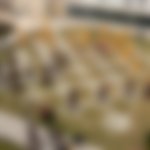 While the chess board made in Lithuania might not be the world’s largest, it’s a spectacular one to play at. What are your thoughts on this insanely enormous chess set?

Medicine Hat Chess Club, Canada, holds the Guinness Book of World Record for the biggest chess set. The dimensions of the chessboard are 5.89m on each side. The king is 119cm tall and 37.4cm wide. They measured it in Medicine Hat, Alberta, Canada, on 27 May 2009. Well, you can’t certainly play with such a huge chess set, but it could definitely account for a unique heritage sighting.

Chess is an ancient game with a very rich history, but the actual revolution in chess was when people designed foldable boards. It was a way people could play it in places and time periods where and when it was banned.

Not just the biggest, but there are unique chess sets around the world that might lure your attention. If you search online, you would find thousands of options available and you might even customize these chess sets as per your likings. If you are an ardent chess lover, you may often search for chess sets on Etsy or Amazon.

Watch This Story- Magnus Carlsen Ripped His Shirt in Anger After Losing in 8 Moves!

The probable number of variations in a chess game is billions and trillions. Of course, we can’t say the same about the chess sets, but we can say that it solely depends upon the imagination of the craftsman.