Derek Jeter and his affair with baseball will never get over. The Yankees legend has dominated the game for at least two-three decades. The game of baseball probably will never see a better ambassador of the sport. Even after years of retirement, Jeter continues to impact the current MLB players.

If reports are legitimate, then Jeter is indirectly responsible for a career decision for a current Philadelphia Phillies player. Notably, earlier this year, Jeter resigned as the CEO of the MLB franchise, Miami Marlins. He served his position for over four years and was also a part-owner of the MLB side.

Jeter is one of the very few players in the history of MLB who have played for a single franchise throughout their careers. His consistency and humbleness are what make him even a better person. He was indeed a gentleman of the game. And now, years after his retirement, his decision to leave the Marlins impacted the career-changing decision of Nicholas Castellanos.

Nicholas Castellanos signed with the Phillies because of Derek Jeter

When Jeter resigned as the CEO of the Miami Marlins in February 2022, no one would have imagined that it will create a problem for the Marlins in the future too. However, Jeter has never tried to harm the Marlins, even after leaving them. 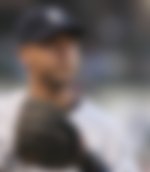 A recent report suggests that Jeter’s departure was the main reason then free agent player Nicholas Castellanos did not sign with the Miami Marlins. Taking to Twitter, sports journalist Barry Jackson confirmed that had Jeter stayed at the Marlins, Castellanos would have signed with the Phillies.

Derek Jeter just wanted him to play for the Marlins. “Phillies OF Nick Castellanos just told me that he thought he would be a Marlin until Jeter left Marlins. Jeter wanted him,” said the tweet.

Phillies OF Nick Castellanos just told me that he thought he would be a Marlin until Jeter left Marlins. Jeter wanted him

However, this didn’t happen, and Castellanos ended up signing for the Philadelphia Phillies. The 30-year-old star outfielder signed a five-year deal for a whopping $100 million. As of now, Castellanos has played for four teams in his ten years of MLB career. Making his MLB debut with the Detroit Tigers, he has also played for the Chicago Cubs and Cincinnati Reds.

Now, it will be interesting to see how much of a help he will be for the Phillies in the 2022 season.