Babe Ruth is remembered as one of the most iconic players ever to don the pinstripes. Needless to say, any items of clothing related to the legend hold great sentiment for the fans. Speaking of which, David Wells, a former New York Yankee himself, happens to be on the good side of one such story.

The story of the Hat

The New York Yankees pitcher recounts the story of how the fateful hat once made him a tremendous amount, courtesy of sheer business smarts and the timing of the sale. Notably, Wells had originally bought the hat worn by the Sultan of Swat for about $35,000.

Back at the New York Yankees stadium

Wells recalls that he took it to the ballpark thinking, “I’m gonna wear this s*cker.” However, his manager, Joe Torre, got wind of the pitcher’s intention and told him that the cap wasn’t part of the uniform and that he couldn’t wear it. But Wells was adamant. For him, it was part of Yankee folklore and, more than anything else, “It was a part of history, it IS history.”

Wells went back and forth with Torre on whether he could actually wear the hat during the match or not. Despite his appeal, the manager resisted his requests of wearing it at the Yankee Stadium. And Wells complied, partly. 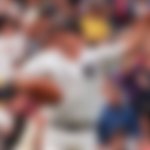 He didn’t wear the hat while he was practicing before the game, as Torre kept a close eye on him, making sure he did not have the hat on. But just as the game was about to begin, Wells recounts that he went into the locker room and wore the hat.

Wells remembers saying to the rest of his teammates, to run out as they start the music. And while Torre did see the hat and ask him to take it off, Wells was already on the mound by then.

So Wells pitched with the hat on and Torre called him in after the game, stating that we would be fined for the same. Even though Wells had to cough up $25,000 for the fine, he mentions in the video, “I wore the hat and history is history.”

The sale of the hat

Notably, the Yankees pitcher saw an auction where a Babe Ruth jersey was to be put up for sale. Knowing that this item would likely cause a bit of an auction battle, Wells decided to list the hat for sale.

Clearly, the move paid dividends because the auction house ended up receiving bids for around $537,278. Wells was able to flip his original investment of $35,000 ($60,000, if you count the fine placed by Torre) for a multiple of that amount as he made his way to the bank.