“I Resorted Back to My Suicidal Thought”: Incurable Kidney Disease That Forced Flex Wheeler Into Retirement Completely Broke Him

Four-time Arnold Classic winner Flex Wheeler was one of the most renowned bodybuilders of his time. Legends like Arnold Schwarzenegger and Ronnie Coleman described him as the best bodybuilder they had seen. Although Wheeler had a potential bodybuilding career, he was interrupted in his journey by many unfortunate events. One of these events was an incurable kidney disease that forced Flex Wheeler into retirement and completely broke him.

Wheeler experienced depression due to several incidents that occurred in his life. During an interview in 2022, the retired bodybuilder opened up about how he resorted to suicidal thoughts after forced retirement.

Flex Wheeler on experiencing suicidal thoughts after his kidney diagnosis

Flex Wheeler had a rough childhood suffering from poverty and insecurities. He began bodybuilding as a coping mechanism to fight the depression that he suffered from teenage. When Wheeler gained fame as a bodybuilder, he aspired to make his career big. However, at first, he was interrupted by a near-fatal car accident in 1994, Wheeler could have experienced lifelong paralysis from it, if not been saved. 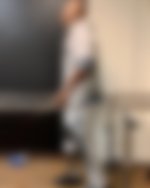 However, the incident threw him back into depression, from which he was trying to recover but was interrupted again by an incurable kidney diagnosis, focal segmental glomerulosclerosis. Due to it, Wheeler had to get his right leg amputated. It ended his bodybuilding career completely. Wheeler stated in his interview at Arnold Sports Festival UK about his kidney transplant, “I was forced into retirement because of that.”

Moreover, in the car accident, he had broken down the c5 and c6 of his spinal motion. Flex explained that “ the car accident I mentioned that it had broke me um I resort resorted back to my suicidal thoughts”

The car accident followed by kidney disease had broken Wheeler’s will to fight back. Hence, he was forced to retire. However, he keeps the fighter in himself alive by training youngsters.

Wheeler might not be able to perform as a bodybuilder anymore, but he continues to help people achieve fitness goals. Previously, he would train people physically, now, the retired bodybuilder has launched his fitness coaching website – Flex Wheeler Coaching. Here, Wheeler provides proper fitness guidance to people online.

He guides people by providing them with various kinds of services that includes, muscle-building training, weight loss, and achieving a healthier lifestyle. In other words, the former Arnold Classic winner wishes to encourage people to have a positive outlook toward life.

What do you have to say about Wheeler’s struggles?

Muskan Sharma is a US Sports author for EssentiallySports. She has a degree in journalism and mass communication from the University of Calcutta. Muskan has worked as a writer for 3+ years but has a knack for filmmaking, too.
ARTICLES BY AUTHOR