FC Barcelona snatched all three points in the very last minute of injury time in one of the games of this La Liga season so far, against Valencia at Estadio Mestalla on Saturday evening. Barcelona, in their last game, demolished Pep Guardiola’s Manchester City 4-0 at the Camp Nou and were eager to take the same brilliant form into their La Liga title defence. The hosts Valencia on the other hand were fresh from their 2-1 triumph against Sporting Gijon at El Molinon.

The game was exhilarating and lively from the first whistle, with attacks from both sides. The Mestalla crowd was right behind their team and gave no chance for Barcelona to dominate the game. The tie also marked Cesare Prandelli’s first home game in charge of Valencia and Neymar Jr’s 100th La Liga game for Barcelona.

The game ended at 2-3 in favour of FC Barcelona, who now sit at the top of the La Liga table with their rivals from the capital still to play in round 9.

The starting line-up for both sides.

Barcelona captain and star midfielder Andres Iniesta’s game came to an early end in the 14th minute when he was stretchered off the field in tears after a hard challenge from behind by Valencia’s Enzo Perez. The Valencia midfielder was however not punished at all for the challenge, leaving Luis Enrique enraged. Iniesta was replaced by Ivan Rakitic, while the home fans joined Barcelona faithful in applauding Iniesta off the pitch.

Barcelona have officially released a statement, saying : “The first team player Andres Iniesta has a partial injury to the lateral collateral in his right knee. When he arrives in Barcelona the player will have more tests to find out the exact extent of the injury.”

Iniesta adds to the injury woes for Barca who already have Gerard Pique, Jordi Alba, Arda Turan and Rafinha missing first-team action due to injuries. Barcelona supporters will be hoping and praying for their Captain’s quick recovery.

A very nice gesture by the home team.

The first goal of the game came in the 22nd minute when Lionel Messi latched onto a pull-back from Ivan Rakitic and fired a left-footed shot in at the near post. The Valencia stopper Diego Alves protested furiously as Luis Suarez obstructed his view as he jumped over the shot from an offside position, clearly blocking the view of the keeper. But the referee didn’t listen to any of his appeals and he was booked for dissent which seemed very harsh.

This counted as Lionel Messi’s sixth goal of the La Liga season and he also scored from the spot-kick and is now in the first position (along with team-mate Luis Suarez) in the Pichichi race.

With five defeats from eight League games, Valencia were up against defending champions and Catalan gaints FC Barcelona, who were in red-hot form after their big win in Champions League mid-week. Cesare Prandeli’s first home game wasn’t going to be a ‘walk in the park’, by any means.

Lionel Messi’s first goal in the 22nd minute would’ve surely hurt the Valencia faithful who were right behind their team since the first minute. But parity was restored at the Mestella when Munir El Haddadi scored a brilliant goal after a pull-back from Dani Parejo. Munir, however, didn’t celebrate his goal against his parent club.

The Valencia crowd was sent into frenzy when Rodrigo netted the second goal after Nani chipped a clever ball over the top to pick out the run of the Spaniard. Valencia made a brilliant comeback.

Although, Luis Suarez and Lionel Messi crashed the plans of first home win for Cesare Prandeli, the performances of Diego Alves, Nani, Parejo, Mangala and others will surely give him confidence for the coming games.

“If you wanna dream, Dream big”, said Cesare Prandeli before the game against Barcelona. Valencia fans will be hoping that their players do justice to their coach’s philosophy and hopefully compete in at least Europa League next season.

Apart from Lionel Messi’s offside goal, Valencia fans and players were furious on another incident where a clear penalty for Valencia was denied. Rodrigo was shoved to ground by Barcelona’s centre-back Samuel Umtiti but the referee opted not to award the spot-kick.

Much like Valencia, Barcelona weren’t impressed by some of the decisions by Alberto Undiano either, who didn’t book Enzo Perez after a hard challenge on Andres Iniesta. Also Mario Suarez wasn’t punished for his challenge on Neymar, earlier in the game.

5. Chaotic scenes at the end 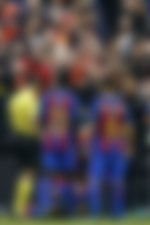 Lionel Messi was seen swearing and cursing in a heated argument with Valencia fans after he converted the penalty, late in injury time to give Barcelona all three points.

Clearly Valencia fans weren’t amused when Barcelona won a penalty in the dying minutes of the game and threw bottles which hit Neymar and Messi, who were celebrating the late winner with Luis Suarez and a few other team-mates.

Valencia fans were understandably disappointed and frustrated after their team lost the game in the very last minute, even after a brilliant fight. But what they did at the end was disgraceful and completely unacceptable. Surely, Valencia will be fined for crowd disturbance by La Liga officials. They have condemn the act, as of now.