Despite best attempts, Riot Games have failed to recognize the hacker problem when it comes to Valorant. Riot Games were also accused of being unethical. We have to realize they are trying their best.
“The kernel anti-cheat driver (vgk.sys) starts when you turn your computer on. To turn it off, you either need to change the name of the driver file so it wouldn’t load on a restart, or you can uninstall the driver (it will be installed back again when you open the game). u/voidox, posted a comprehensive guide about the anti-cheat system on Reddit.

Valorant anti-cheat starts upon computer boot and runs all the time, even when you don’t play the game from pcgaming

So yeah, the big issue here is it running even when players don’t have the game open, from startup no less. EDIT – It runs at Ring 0 of the Windows Kernel which means it always has the same rights as administrator from the moment you boot.”

In layman’s terms, the anti-cheating driver is always searching through your console. Valorant is breaking records with its viewership on twitter and would definitely make a great fan base, but the game still needs a lot of work.

How Are Hackers Getting Past The Anti-Cheat Driver? 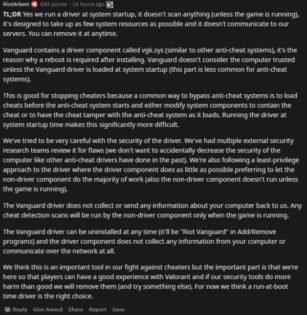 While the driver sounds absolutely OP on paper, it might not be enough to stop the hackers. The game is in its closed-beta version right now, and people are managing to hack through just as easily. Riot Games have made it mandatory for vgk.sys to run 24*7, an absolute necessity to play Valorant. They also banned the first cheater a few days ago with Paul Chamberlain coming out with a tweet. While it is quite common in CS:GO, we expected Valorant to be much better.

You are definitely entitled to your opinion, but if you’d like more information on the subject, @arkem has done a great job explaining the Vanguard system on reddit. Hope this helps clarify what we’re trying to achieve and the steps we’re taking to ensure it’s done right: pic.twitter.com/2cLA1h0ank

People will always find innovative ways to cheat, that much was clear from the start. The problem with the anti-cheat is also a concern, as when it gets compromised, it can leave your entire computer at risk. Creating cheats and making money off it will always be a business move.

If a game is in its beta, and people are already cheating, then it might be challenging to say whether the game will be cheat-free after launch or not. Riot Games claimed that their game would not allow cheating.

However, that was a big statement to make, we can only hope that Riot Games will deliver on their promise. It is common for any free game to have cheaters with fake accounts (that is also a form of content creation). We can only wait and watch what steps Riot Games will be taking to make the game cheat-free on release.