The video gives a brief look to everyone who might have missed the match live. More than everything, the sheer excitement around this clash was pretty visible in the video.

It took us to the practice sessions between Federer and Nadal, their meetings with children benefitted by the Roger Federer Foundation and to the eventual match involving Trevor Noah and Bill Gates.

The Swiss maestro thanked Trevor Noah, Bill Gates and Rafael Nadal in the caption of the Twitter video.

Even Bill Gates posted the video via his Twitter account. He thanked the Roger Federer Foundation for allowing him to work for the good cause of helping children.

It was a magical night. I'm very happy to support your foundation's incredible work. https://t.co/2Gg27MpxIl

What Was So Special About The Charity Match Played By Roger Federer?

It was less of a match and more of a spectacle. The event featured a record-breaking crowd of 51,954. In fact, the previous record was also held by a Roger Federer exhibition match. This was when Federer beat Alexander Zverev in Mexico City in front of 42,517 fans.

However, the match had a much deeper purpose. The proceeds for the match were to go towards the Roger Federer Foundation. In fact, the money would be used to aid the education of South African children.

How much money did the match raise, you ask? It went on to raise $3.5 million against the originally set target of 3 million. 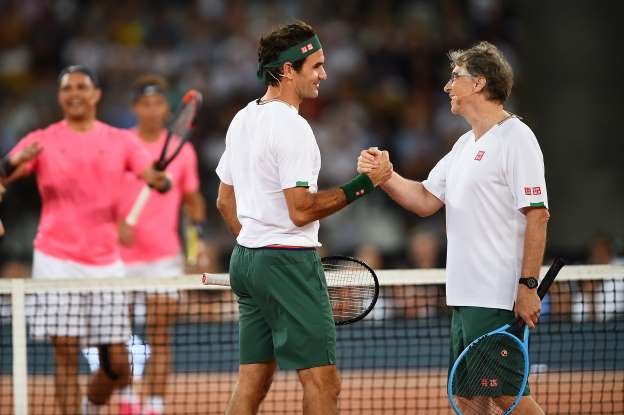 In the end, Federer proved successful as he defeated Nadal in straight sets.

Federer will next be seen competing in Dubai. Entering as the defending champion, the Swiss maestro will face the difficult challenge of Novak Djokovic this time.

Do you think Roger Federer can reclaim the title at Dubai tennis Championships?