Who are the Recently Released Veteran WWE Employees?

The latest update v14.10, has shifted the meta in Fortnite battle royale. While this was necessary to adjust to the new dynamic, there are several things one might have missed. SypherPK makes a comprehensive video, explaining everything Epic Games did not tell the players. With all the recent changes in mind, players need a good idea before jumping on the bus.

As the season progresses, the plot is becoming extremely clear to players. Marvel characters will appear on the island and try their best to stop Galactus. This is the narrative Epic Games is going ahead with. Similarly, they have also made sure that the competitive side is not neglected. Recently, in a blog, they mentioned all the new rules and regulations for competitive Fortnite. Some of these rules encompass clout farming, colluding, and so on.

From a content standpoint, the players are being treated to a marvelous experience. The sheer magnitude of the collaboration with Marvel is helping in a big way to get new players. Thus, this season is shaping up exactly the way Epic Games planned, especially after the Apple fiasco.

In the video, Sypher infiltrates the Stark Industries, fighting all the AI Stark Robots placed there. Each one of them hold a Stark Industries Energy Rifle, which might come in handy. Getting to Iron Man is the easy part. Defeating Iron Man to win the mythic weapons is easier said than done. 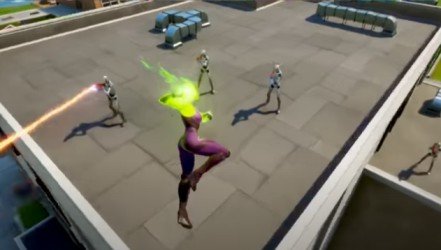 As predicted, the location is a hotspot, and numerous players tend to hide it out for an ambush. To get to Iron Man, players should first eliminate every other opponent. The mythic items that are available are the Iron Man’s Unibeam and Iron Man’s Repulsor Gauntlets.

Read more – How To Complete Wolverine Challenges In Fortnite

The current meta after the update

Sypher also spoke about floppers. He added, “The Midas flopper is now in the game. I believe it’s a very rare flopper. I don’t know if it’s just rare and you add it to your collection.” The community has been speculative about the Midas flopper turning the inventory to “legendary” level. However, they are sporadic, and as of now, fishing has been nerfed in the meta.

The significant changes to the game’s dynamic introduced through these mythic abilities will last for a while. Players need to adapt quickly to using mythic abilities and combining them smartly.