Eight years ago, the sports community saw one of its most prominent figures at crossroads when Andrew Flintoff decided to hang up his batting gloves to lace up the boxing ones.

The British all-round cricketer surprised everyone with the move and entered the boxing world straight as a heavyweight contender. Being a cricket superstar, Flintoff was already a familiar figure to the masses.

However, he was yet to make a statement in the combat sports world as he did in the cricket universe.

Surprisingly, Flintoff made the statement on his debut itself. He notched an impressive unanimous victory against the American, Richard Dawson, in his maiden contest.

Yet, the Briton never appeared again inside the ring. While Flintoff remains to be one of the best all-rounders in the history of cricket, fans seemingly wanted to see more of him inside the boxing ring. Especially after a stupefying debut. 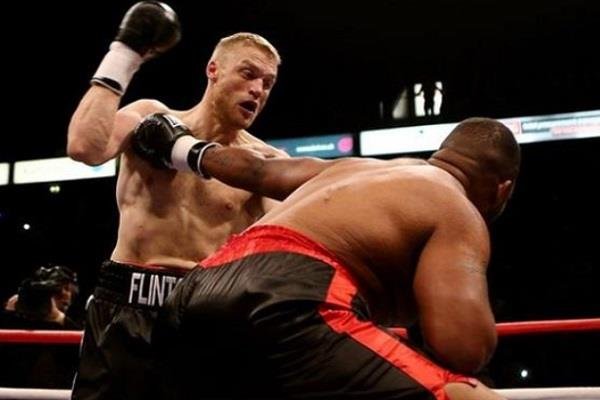 Andrew Flintoff in the boxing ring

Ending an 11-year-old stellar career in cricket with England in 2009, the former skipper of the team entered the boxing ring in 2012. Flintoff was scheduled to face American boxer Richard Dawson in a ‘much-awaited’ event at Manchester.

Dawson, already on a two-fight win streak, squared off against Flintoff in the UK. However, the Brit successfully managed to outpoint Dawson to emerge victorious in his pro boxing debut.

It was a home audience for Flintoff at Manchester. No wonder the Brit did not disappoint the crowd.

Despite being a close contest, Flintoff managed to land more significant strikes in the matchup. He also re-established himself after being hit badly in the second round. Thus, the judges scored the contest 39-38 to award Flintoff the victory.

Although Flintoff vowed to remain active in the sport later, he didn’t act on it.

Why did the Brit enter the boxing world?

My last day as an England cricketer , none of it would ever have been possible without @colinflintoff239 , love you dad , thank you so much for everything you do ❤️

Before stepping inside the ring, Brit superstar Flintoff explained why he decided to get into the combat-sports universe. Throughout the years, England has produced umpteen elite boxers. Thus, Flintoff wanted to know how tough it really was.

However, the former cricketer also called it to be one of the “oddest” experiences in his life.

Speaking with Guardian before the fight, Flintoff said, “It’s been possibly the hardest thing I have ever done or probably is the oddest thing.

“I have trained hard to get stronger, I took a technique of boxing, had to go into the ring and know how to get hit.

“I have done it to realize what boxers go through and how hard it is, the sacrifices they make, the hours that they are putting and commitment”

Flintoff a 42-year-old and is far away from being active in any type of sport. However, he is a television and radio presenter for the time being. Thus, the Brit remains a familiar face as far as sports fans are concerned.

“Steve Smith Took the Blame for Everyone Else” says Andrew Flintoff