Lewis Hamilton and a Long List of His Girlfriends

Lewis Hamilton is arguably one of the most popular drivers on the F1 grid. With the kind of popularity he has had, it shouldn’t be surprising that he has attracted more than his fair share of attention.

Hamilton first rose on the scene during his championship-winning year in 2008. And with rising fame, came several relationships. But even before his big break, he dated several famous personalities. So, who are the women who dated Lewis Hamilton? 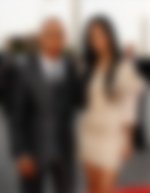 The Pussycat Dolls singer was an on and off girlfriend of Lewis Hamilton. Their relationship lasted for a very long time, from 2007 until 2015. In the final year of their relationship, they split for good.

Danielle Lloyd dated Lewis for six months in 2002, long before his big break in Formula One.

Jodia Ma dated Lewis for four years until they finally parted ways in June 2007. The two were childhood sweethearts and met at the Cambridge School of Arts and Science.

This was when Lewis Hamilton was first establishing himself as a sports star.

Another person Lewis reportedly dated was Miss Finland Lotta Hintsa. Lotta is the daughter of Lewis’ F1 mentor Aki Hintsa – who passed away in 2016 at the age of 58. Though the model confirmed that she had a good relationship with Lewis, she denied that they had ever dated.

Vivian Burkhardt represented Grenada in the Miss World pageant in 2007 – and went on to win Lewis’ heart.

The couple appeared at a number of events together, but only dated for a few months.

Lewis Hamilton and the Barbados star have been friends for a fairly long time. However, after his split from Nicole Scherzinger, he and Rihanna were rumored to have taken things to the next level.

Rita Ora is yet another pop star who was reportedly dating Hamilton. The two never confirmed their relationship publicly, but were often spotted together on numerous occasions.

In November of the same year, Rita played the loyal girlfriend by supporting him at the Abu Dhabi Grand Prix – where Lewis was forced to surrender his crown to Nico Rosberg.

Hamilton met the Hungarian model at the Cannes Film Festival.

She went on to support him at the European, Hungarian, and Monaco Grand Prix.

Rumors of model Winnie Harlow dating Hamilton first emerged at the GQ Awards in September 2016. It was reported that they left the London party in separate cars. They were also pictured together at the amfAR Gala in Cannes, on May 2017.

Earlier in 2017, Lewis was rumored to be enjoying a fling with model Sofia Richie, the daughter of singer Lionel Richie.

The driver was in the front row with her at Paris’ Couture Fashion Week back in January and took her for a ‘lunch date’ in May.

Currently, Lewis Hamilton is dating American rapper/singer Nicki Minaj. Reports emerged of the dating after they were spotted at New York Fashion Week together. The pair also shared social media pictures of a getaway in Dubai.