‘Continue to Inspire So Many Including Me’: Lewis Hamilton Pens a Touching Message to Serena Williams

Serena Williams suffered a loss at the hands of Naomi Osaka at the Australian Open 2021 and it was an emotional one to take for the 39-year-old.

Following the defeat, athletes like Lewis Hamilton and Novak Djokovic offered consolatory messages to the 23-time Grand Slam champion who fought like a true warrior at Melbourne.

Serena Williams made a tremendous run at the Australian Open 2021 to reach the semis. She was incredibly dominant with her game, but Naomi Osaka just played better tennis when they both faced off at the Rod Laver Arena.

Formula One kingpin Lewis Hamilton is someone who admires athletes across different sports. The 7-time World Champion is an ardent follower of Serena Williams and backed her to win Australian Open 2021.

However, Serena Williams ended up facing an agonizing loss to Naomi Osaka, after which she exited the stadium in front of a standing ovation from the fans. The emotional moment touched the hearts of many, including Lewis Hamilton.

The British driver then posted an Instagram story for Serena Williams expressing his support for the American. Here’s what he wrote:

“I’m so proud of you, you fought like the champ you are and continue to inspire so many including me with your fighting spirit and your humility.” 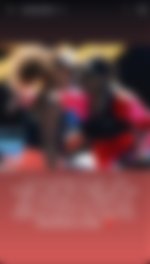 It is incredible to see Hamilton’s gesture for the disheartened 23-time Grand Slam champion. She wasn’t happy with the loss and kept her hand to her heart as she was leaving the arena.

Messages like these from other athletes would surely help Williams gain a bit of positivity at this point in her career.

Naomi Osaka dismisses comparisons with Serena after the win

Naomi Osaka is now into the finals of the Australian Open for the second time in her career. She previously reached the stage in 2019 and won the tournament. Moreover, Osaka won hearts with her humility after posting a massive win against Serena Williams.

Williams and Osaka shared a warm hug after their match and people were quick to caption it as ‘two legends’. Osaka shared one such post made by Bleacher Report on Twitter and wrote: “Lol so I’m not even close to being a legend yet but I’ll try my best.”

Getting past Serena Williams is always a hard task, but Naomi Osaka aced her test. She is now the favorite to win the women’s singles honors, but will have to defeat Jennifer Brady in the finals to win her second crown at Melbourne.