The tennis legend and former World No. 1, Martina Navratilova, is known for her victories 18-time Grand Slam winner. The player has been actively voicing her opinions on various matters through social media. However, despite all that, the legend makes sure to enjoy quality time on a weekend at her home, in the close vicinity of her loved ones, which consists of a bunch of her cuddly pets and her beloved partner, Julia Lemigova. 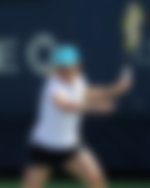 Martina Navratilova enjoying her weekend with her pets and partner

Martina Navratilova knows how to relax properly and take a break. She and her partner Julia Lemigova have given us the pet goals that we all admire. Martina uploaded a picture of her partner chilling with all her pets.

Her dogs and cats surrounded Julia. She tweeted, “Just another Friday night in our household:)”. One of her dogs was in a protective cone. Martina clarified it was because “He keeps chewing on his foot where he had surgery, making things worse and recovery longer… #doublecone”. She has four dogs and two cats.

Julia could be seen cuddling up with their pets and using her phone. It is indeed a heartwarming sight. Her fans shared pictures of hanging out with their pets on the weekend. Martina responded to their replies as well. People asked about their names and assumed that one had to be a volley. She replied, “No tennis names:)”.

Just another Friday night in our household:) pic.twitter.com/4rfbSmb1RL

World-famous rivalry of Martina and Evert

We know Martina Navratilova and Chris Evert for their world-famous rivalry. They met each other 14 times in the Grand Slam finals. And that is an astounding number for both of them to stand against each other. The players had raised the bar of women’s tennis and have taken it to greater heights. The two players, though rivals on the court, have come out in support of each-other on various occasions.

Recently, in an unfortunate news, Chris Evert was diagnosed with 1C ovarian cancer. The legendary player has received support, prayers, and blessings from all over the world. Moreover, Martina Navratilova has shown her faith in Evert’s resilience and is hopeful for her speedy recovery.