Genie Bouchard has been out of the tour for more than a year now. However, her absence hasn’t hampered her status as one of the most prominent players on the tour.

Despite being one of the most famous players in the circuit, not many of her fans know that apart from being a tennis player, the Canadian star also has a love for basketball. Going back in time, in 2016, Bouchard played in the NBA All-Star Celebrity Game. Being a part of Team Canada, things became even more interesting with rapper Drake as the team’s coach. Three years later, in 2019, Bouchard recalled her moments with Drake during the game.

Following its more than a decade long tradition, NBA, in 2016, hosted the 14th NBA All-Star Celebrity Game. Played at the Ricoh Coliseum in Toronto, the match had Team Canada going against Team USA.

Being a part of Team Canada under the coaching of Drake, Bouchard started by praising the rapper. “He (Drake) was super positive. He said let’s go and have fun. I was like, give us more tactics, we really want to win. Because it was team Canada vs team USA. He said to go have fun,” she stated.

Things seemed to be fine until this point. However, it turned around when Bouchard recalled how she was bizarrely benched after putting a shift in the match. Recalling the moment, Bouchard said, “I went to go play a shift and I came back and he was like, Genie, I’m benching you. I was really not good.” 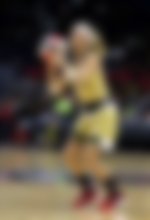 It was only after three years that she realized the reason behind it. Apart from Bouchard, Team Canada also had players like Milos Raonic, actor Tom Cavanagh, NBA legend Tracy McGrady, and others. In simple words, a team dominated by men.

Throwing light on what she thought was the reason behind her benching, Bouchard said, “It was mostly men playing as well. The egos were coming out. Men were trying to show off and no one was passing me the ball and Drake just thought that I wasn’t that beneficial for the team.”

The expected comeback of Bouchard

Apart from the bizarre All-Star benching, Bouchard also had a not so pleasant season in 2016. Ever since then, even after repeated tries, Bouchard has not been able to reach her prime form. However, currently, fans are still hopeful of seeing her back on the tour soon.

Being one of the most active social media users, Bouchard has been dropping major hints of her comeback. Fans anticipated Wimbledon to be her comeback tournament. However, with the Championships being played without ranking points this year, Bouchard chose against using her protected ranking. With just the hard-court leg of the season left, the Canadian recently announced her participation in the Citi Open in Washington.

Do you think Bouchard will make an impact in the final part of the season?