Rick Macci is largely counted as one of the greatest coaches in the sport. Over the past three decades, the 67-year-old has given the tennis world some of its biggest stars, including Venus and Serena Williams. Considering his impressive career, what is the grind that one needs to undergo in order to get in his shoes?

Late last year, the tennis world had a moment of joy with the release of the movie ‘King Richard’. The movie was the life story of Richard Williams, the father of Venus and Serena Williams. While the acclaimed movie had numerous actors taking up different roles, the portrayal of Rick Macci came into the hands of Jon Bernthal. Following the success of the movie, the 45-year-old actor opened up about his preparation for the on-screen portrayal of the Hall of Famer coach.

Tennis is a sport considered simple till the time one plays it. Similar was the case with Bernthal. Known for his neat acting skills, the actor opted to take up tennis lessons as the first step in his journey to becoming Rick Macci. Elaborating on his journey, he started by admitting, “There’s a tennis academy right here in Ojai, California, where I live, called the Weil Tennis Academy.

Going ahead in the conversation, he further stated, “I started training 3-6 hours every single day. It’s amazing how much you can pick up when you have great coaches and you have that time.”

It is a widely accepted notion that a great tennis star need not necessarily be a great coach as well. Vice versa, a great coach might not necessarily have been a great player himself. The training seemed enough for Bernthal to portray a tennis player. However, to become a coach, it seemed necessary to take the extra step.

Taking the next step to perfection

Getting his hands on the game, he next moved towards training to become a coach. Detailing his next step, Bernthal asserted, “Being athletes, we really wanted to get the tennis components right. I just didn’t train in tennis. I started training in coaching.” Starting to get the hack of coaching, he next went on polishing his skills. “They let me coach one of their junior nationally ranked players,” Bernthal said. 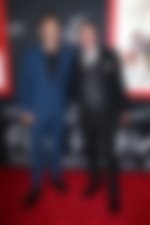 Going ahead in the confession, he further elaborated on his rigorous training. He ended by saying, “Learning the vocabulary of coaching, learning how to run drills, how to feed, how to understand psychology. These folks let me train there, train players there every day. Then they let me start coming and training folks in character.”

After much effort, Bernthal’s preparation finally bore fruit with the release of ‘King Richard’. The Washington born actor received rave reviews for his portrayal of Rick Macci. Defining his efforts in a line, he ended by saying, “It was great.”