The popularity of Hulk Hogan was at its peak when he was an in-ring competitor. Hulkamania became so huge in WWE that it spilled over into the non-professional wrestling world as well. Hogan has always been a popular entity among NBA superstars and it is no secret that basketball legend Shaquille O’Neal is Hulkamaniac. Over the years, we have seen O’Neal showing his support for ‘The Hulkster’, but have you seen Hogan supporting Shaq during his game?

An Instagram fan page shared a picture of Hulk Hogan supporting Orlando Magic. ‘The Hulkster’ did his iconic biceps flex pose and sported the jersey of the first NBA team in which Shaquille O’Neal played. 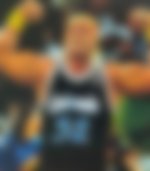 On close inspection, fans would notice that it isn’t just an Orlando Magic jersey, but a #32 jersey. This is significant, as it was Shaq’s jersey number from 1992 to 1996.

The duo showed their support for each other and marked their presence at the other’s events. While ‘The Hulkster’ was present at a game in 1994 to support his fellow Hulkamaniac, Shaq showed up at WCW several times to support Hulk Hogan.

Moreover, O’Neal also made an appearance on Impact Wrestling (f.k.a. TNA) in 2012 as a guest of Hulk Hogan. The four-time NBA champion was also present in a backstage segment with ‘The Hulkster’.

Shaquille O’Neal’s other appearances in pro-wrestling

Apart from appearing in WCW and TNA to support Hulk Hogan, Shaquille O’Neal has appeared in WWE and AEW too. He made two WWE appearances. One came in 2009 as the Raw guest host, and the other came at the WrestleMania 32 Andre the Giant Battle Royal.

His last major pro-wrestling appearance was at AEW Dynamite in March 2021, teaming with Jade Cargill to defeat Cody Rhodes and Red Velvet.

Which other NBA stars are fans of Hulk Hogan?

The popularity of Hulk Hogan is unmatchable. Even after all these years, Hulkamania runs wild among the fans and also the celebrities. Shaq is not the only NBA star who is a fan of Hogan.

Former NBA star Dennis Rodman is also a fan of Hulk Hogan. Back in the late 90s, Rodman signed a multi-match contract with WCW just to be a tag team partner of Hogan. Moreover, the former Chicago Bulls player is also a nWo member.

Also, current NBA star Kevin Durant is a fan of Hogan along with Kevin Nash and Scott Hall. He is a huge supporter of the famous WCW faction nWo.