NBA icon Shaquille O’Neal is not new to the WWE world. Shaquille O’Neal first tried his hands in professional wrestling in 1984, when he shared the ring with WWE Hall of Famer Hulk Hogan. This was one of the most outstanding achievements of Shaq’s life when he stood next to Hulk Hogan inside the squared circle.

However, there’s one thing that very few people know about ‘The Big Shamrock’ in the WWE. To top it up, this record of Shaq in Mr. McMahon’s WWE is unbeatable.

WWE boss Vince McMahon once in 2009 invited ‘The Big Shamrock’ to guest host the Monday Night Raw episode. Of course, NBA and WWE fans flipped out of their mind when the decision was made, as this visit of Shaq was special.

What is the unbeaten WWE record of Shaquille O’Neal?

The Big Shamrock stepped inside the arena as Jerry “The King” Lawler welcomed him. Shaq received a massive pop from the crowd, and his first words were that he shared a “Hello” from LeBron James. Then, of course, Shaq was glad to host the Raw episode, and he cheered the crowd.

However, Shaquille O’Neal’s celebration was short-lived because of former WWE Superstar Chris Jericho. At first, Chris Jericho insulted the NBA icon by stating that he expected NBA legend Kobe Bryant to host the Raw episode and not Shaq. This move by ‘Le Champion’ Chris Jericho was like digging a hole for himself. 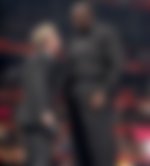 Being the particular host of Raw, Shaq announced a match between the Big Show and Chris Jericho vs. Cryme Tyme (Shad Gaspard & JTG). In addition, The Big Shamrock declared himself as the special enforcer for this battle.

The Big Shamrock did not stop his fun here!

During the match, Shaq stood by the ringside as a WWE official to side with tag team Cryme Tyme. Then, in the middle of the match, special enforcer Shaq pushed Chris Jericho inside the ring.

Later, the Big Show had Shad Gaspard and JTG grabbed in a double chokeslam maneuver. In addition, the Big Show prompted ‘The Big Shamrock’ to step inside the ring.

This moment made the WWE Universe extremely hyped as Shaq tore the WWE official shirt, just like Hulk Hogan. The NBA Hall of Famer stepped inside the squared circle to square off against the Big Show. Both Giants grabbed each other by the throat in an attempt for a chokeslam; however, Cryme Tyme blindsided the Big Show.

This gave an advantage to Shaquille O’Neal. And he pushed the Big Show outside of the ring with a colossal force. But unfortunately, while ‘The Big Shamrock’ has been a part of the WWE, he never signed a full-time deal with the company.

The WWE Universe would love to watch Shaquille O’Neal wrestle again in the squared circle.