The NXT Women’s Champion, Mandy Rose, is currently having a WWE run of her lifetime, since her return to the Black and Gold brand’s revamped version, NXT 2.0.

When not wrestling, Mandy Rose is often seen having photoshoots. She shares multiple pictures from her photoshoots on her social media. Also, sometimes Rose spends her free time around the beach or a pool under the sun relaxing.

The 2014 WBFF Bikini World Champion recently had a relaxing time on the yacht ahead of this week’s NXT episode. She shared the picture on her social media with the caption, “I’m the captain now. 🛥@sunsetyachts_.”

Rose shared two pictures with a close shot of her wearing a ship captain’s hat and another full-body picture posing on the yacht. The NXT Women’s champion had a great time during her time relaxing in the waters.

As of this is written, Mandy Rose is the NXT Women’s Champion for 236 days and is going strong with the title ruling over the women’s division. Apart from Rose, her teammates Gigi Dolin and Jacy Jayne have won the NXT Women’s Tag Team Champions twice.

The team won the titles from Io Shirai and Zoey Stark and had 158 days of the first reign as champions. They lost the titles to Dakota Kai and Raquel González, but won them again three days later. As of now, they have held the titles for over 77 days and are going on.

Currently, Mandy Rose is on the NXT brand, and her best friend, Sonya Deville, is on the RAW brand in WWE. Instead of being busy with their respective brands, the best friends stay close and, in fact, they run a YouTube channel named Mandy & Sonya Damandyz Donutz, where they share their take on foods they taste while traveling.

Taking with the Forbes, Deville revealed the news of starting their own Donut shop with Rose. She said, “And so eventually we were like, ‘Wait, we’ve tasted like every donut in America. Why don’t we create our own donut line and make it super true to what we like in a donut?” 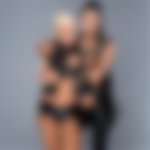 She added, “Because we became like aficionados of donuts at this point. And so here comes our baby, DaMandyz Donutz. We have a website, DaMandyz.com, where we sell a lot of cool, fun merch and stuff. But now we are launching our first official donut spot in Los Angeles.”

You can keep up to date with the new Donut spot and all things about DaMandyz Donutz on the official website. Deville also mentioned the new spot will work with a delivery service.