5 WWE Superstars Who Can Be the Next Universal Champion

Published 06/09/2021, 3:05 PM EDT
Roman Reigns has cemented his legacy as one of the top WWE wrestlers in history. His WWE Universal Championship run is nothing short of phenomenal. This is only because WWE officials finally listened to the fans and made ‘The Big Dog’ a heel.
Reigns has held onto the championship for almost a year; now the fans are speculating if a title change is imminent. Today we list the Top-5 wrestlers who could potentially win the Universal Championship from Roman Reigns.
Keep in mind that some of the names mentioned are on the prediction that they might end up on SmackDown after the WWE Draft.

‘The Phenomenal One‘ is one of the most beloved superstars on the entire roster. Some fans feel that WWE is underutilizing AJ Styles’ true potential.

He is currently one-half of the WWE Raw Tag Team Champions with Omos. But he can be more than a tag team champion in the eye of the fans. A good WWE Draft could catapult him into the main event at SmackDown.

Kevin “K.O.” Owens is a prizefighter in WWE. His push has been on and off for quite some time. But this doesn’t mean he isn’t a contender for the Universal Championship.

His feuds with the likes of John Cena were the highlights of that year, and the fans want to see him get another significant push.

Watch This Story – The Undertaker, Randy Orton and More: WWE Superstars Who Hit Their Finishers in Mid-Air!

In our opinion, who better to displace ‘The Head of the Table‘ than an old comrade? There is hardly another wrestler in the entire roster other than Rollins who knows Reigns better.

‘The Architect‘ must be itching to snatch away the WWE Universal Championship from a man he once called brother. What a perfect year it would be for Rollins to win the championship after becoming a father. 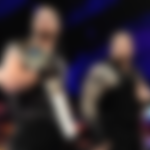 ‘The Beast‘ Brock Lesnar always has the potential to make a sudden comeback and win the hottest championship from the top guy.

The fans won’t be surprised if this happens once again. Both Reigns and Lesnar have excellent chemistry in the ring and the prospect of Lesnar winning the title is something the fans would love.

#1 our list is ‘The Scottish Psychopath‘. He has been chasing his WWE Championship ever since he lost it. Bobby Lashley has been his target for months now.

With a good WWE Draft, McIntyre could find himself chasing another championship and possibly winning it. The Scotsman has been a fan favorite ever since his return to the company and with the shakeup of the entire roster, a new storyline feud with Reigns is imminent.