Becky Lynch and Seth Rollins are two of the most well-dressed Superstars in WWE. Or, are they? The verdict is open but they already have the answer for the WWE Universe.

It so happened that Vince Russo recently criticized ‘The Man’ and ‘The Visionary’ for dressing ridiculously. He believes that both of them are doing this to get a pop from the people at the back, and they’re character transitions haven’t been smooth.

However, Lynch and Rollins do not actually care who says what. That’s what their characters represent – always do what you feel is right. Therefore, Lynch took to social media and posted a simple “You’re Welcome” while posing with Seth Rollins.

The real-life couple look brilliant, at least, to their fans they do.

Keeping that aside, another reason she used that caption is to truly embrace the WWE Universe. Undoubtedly, both of them have been trying to find the right balance between work and family, especially with a toddler in the house.

Seth Rollins has nothing but appreciation for Becky Lynch

‘The Drip God’ doesn’t like football, but he loves Mondays! Obviously, for Monday Night Raw – His show. He really does know how to brag about himself. However, that’s not all he brags about. 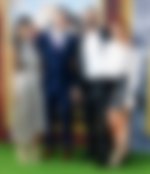 He took to social media to express his appreciation for his wife, and ensured to mention the champion she is.

But, he didn’t forget the most important lady in Lynch and his life – Roux.

…but I love MY show! The A show! Raw! What a win for this guy (me)! #1 contender. Team RAW captain. Smokin hot champ wife. GOAT baby child. Untouchable in the ring. I can’t be bothered tonight! HA HA!

Currently, Becky Lynch is the Raw Women’s Champion. The number one contender for the title is Liv Morgan, after she defeated Rhea Ripley, Bianca Belair, Zelina Vega, and Carmella in a Fatal 5-Way match.

On the other hand, Seth Rollins is the number one contender for the WWE Championship. The current champion is Big E.

It’s safe to say that both Lynch and Rollins are involved in important storylines in WWE. While one already holds the championship, another is pursuing it actively!

It’s possible they’ll pair up once again for a Mixed Tag Team Match!

Now, won’t that be interesting?