The Undertaker and The Phenomenal AJ Styles went head to head at WrestleMania 36. This match marked the retirement of The Undertaker. However, WWE produced a once-in-a-lifetime experience for the audience.

The two WWE legends collided in a ‘Boneyard Match.’ It can be described as a truly cinematic experience, an incredible match. WWE legend Taker once again claimed another soul at the grandest stage of them all.

The legacy continues. @WWE superstar The @Undertaker walked out to “Now That We’re Dead” on @WWENetwork! pic.twitter.com/mC4hCGLpOm

The current WWE Raw Women’s Champion, Becky Lynch, had good words about the match. In 2020, The Man Becky Lynch spoke with The Mirror Sport about the Boneyard Match battle at WrestleMania between Taker and Styles.

Becky Lynch talks about The Undertaker vs. AJ Styles at WrestleMania 36.

Big Time Becks seemed to be impressed with the dark and musty filmed encounter match. On the first night of the biggest show of the year, The Phenom defeated Styles in a brutal outdoor cemetery battle.

In addition, the cinematic experience of the showdown included various props such as tractors, shovels, caskets, etc. However, the major highlight of this match was The Undertaker in his 2000s gimmick, ‘The American Bada**’ rolled up on his motorcycle.

The Mirror asked Becky Lynch to shed light on her views about the Boneyard match. She stated, “Absolutely. This time (during a pandemic) is a whole new opportunity for us to reimagine wrestling. To think of different ways for how we can do this and to be more creative. That’s what that match did. It proved its value. It was awesome – it was so entertaining.”

Many other WWE Superstars such as Mick Foley, Michael Cole, JBL, and The Undertaker’s wife Michelle McCool took to Twitter to share their thoughts on the most fantastic match in the history of WWE.

The Man Becky Lynch emerged victorious over the former MMA fighter Shayna Baszler on the first night of WrestleMania 36. 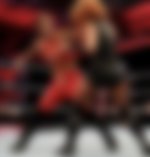 Big Time Becks retained her gold after reversing Shayna’s submission, “Shwing,” attempt into a fortunate pinfall. In the same interview, Becky Lynch stated her desire to be in a Boneyard match.

This is a dominant affirmation by Big Time Becks. It appears that Becky Lynch wants to battle in a Boneyard Match. Although the Raw Women’s Champion has paved her way to be at the pinnacle and, she can surely bring an excellent performance if she is a part of the Boneyard Match.

But, will the WWE give Becky Lynch the opportunity of an incredible Boneyard match?