Roman Reigns had one hell of a night on this week’s episode of WWE SmackDown. ‘The Tribal Chief’ successfully defeated Riddle in a title match against Riddle tonight. But after the match, he had a surprise waiting for him as Brock Lesnar returned to WWE television.

Following his victory against Riddle, Roman Reigns claimed there is no one left to challenge him for the titles. But neither did Reigns nor the fans expect Lesnar’s arrival on tonight’s episode of WWE SmackDown.

‘The Beast Incarnate’ announced his return in style as he took out The Bloodline on his own. Lesnar first offered Reigns his hand for a handshake. But then as Reigns gave him his hand, Brock Lesnar did what Brock Lesnar does. He picked Roman Reigns on his shoulders and hit him with an F5.

Soon after that, The Usos tried to attack Lesnar. But the Beast Incarnate looks all set for revenge as he hit The Usos with an F5. After Lesnar’s shocking return to WWE, fans took to social media to give out their reactions.

Vince with a call to Brock Lesnar this afternoon.
"Brock… I'm in trouble."

THANK GOD Someone Did.. THANK YOU BROCK!! #SmackDown!!!

Nooo, I want a Matt Riddle v Roman Reigns beef, not a rerun of Roman v Brock. 🥺😩 I love you Brock but you need to mix it up with someone else now.

Seth cashing in on them again

I love cowboy brock but like come on. WWE is running out of ideas so they do the same rivalry we’ve seen for nearly a year now. Enough is enough

Though fans are happy about Brock Lesnar’s return, they don’t want him to feud with Roman Reigns once again. Reigns and Lesnar have been involved in a feud ever since the last few months of 2021.

Some fans though their WrestleMania 38 match was the last match in their recent feud. But this Reigns-Lesnar rivalry is far from over. And the two men will once again clash inside the squared circle soon. 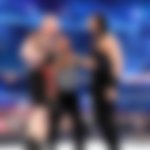 Also, some people are not pleased with Roman Reigns holding both the WWE Championship and the WWE Universal Championship. And who knows, Lesnar might be the man to take the titles away from Roman Reigns.

Do you think Brock Lesnar can get his revenge on Roman Reigns for his loss at WWE WrestleMania 38? Or will the Tribal Chief defeat Lesnar once again? Let us know in the comments below.