‘The Queen’ Charlotte Flair ruled 2021 with her Women’s Championship. The 2021 year was a pretty decent year for Charlotte, with epic matches and a great championship reign.

Besides her WWE moments, she got some special moments in her life. Recently, she posted her best pictures of 2021, which depict her whole 2021 year. In the pictures, we could see her enjoying with her partner Andrade, her father Ric Flair, Apollo Crews, and some backstage shots. 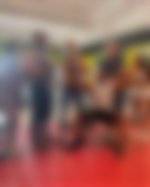 The Queen had a spectacular year with her family and friends. Moreover, Andrade ended up the rumors regarding their relationship trouble.

Fans could see her best pictures of the year in her latest post. As 2021 ended, Charlotte Flair gave a throwback to her 2021 year with pictures on her Instagram.

Charlotte Flair had successfully defended her SmackDown Women’s title till the end of the year. However, a new year with new rivals and new opportunities is waiting for the Queen.

What’s next for Charlotte Flair?

In the recent episode of Friday Night SmackDown, Charlotte Flair defeated the former NXT UK Champion Toni Storm. Both women fought well, but The Queen gave no chance to do so. In the end, she stood victorious.

Charlotte Flair is a 13-time Women’s Champion with epic match victories. Right from her NXT debut in 2012, she gave her best to be in the spotlight. Eventually, she gave a dominant performance on the women’s roster. After her debut on the main roster, she got excellent opportunities.

Her match with Nikki Bella for the Divas Championship is one of the most anticipated matches in WWE history. Over the years, Charlotte Flair achieved many new achievements and became the top star in the wrestling industry. Moreover, her main event was WrestleMania 35 alongside Becky Lynch and Ronda Rousey.

Charlotte had walked a long way up in the wrestling industry, becoming the top star with her wrestling skills and attitude. Many wrestling fans see her as their inspiration. A new year is waiting for Charlotte Flair with new rivals on the card.

The SmackDown roster has some potential superstars who can set their eyes on the SmackDown Women’s Title. As the Royal Rumble 2022 is arriving, we could see a new winner who could challenge Charlotte.

Charlotte Flair is a potential wrestler with spectacular looks, attitude, wrestling skills which make her unique. The year 2022 is waiting for her to know her new rivals and prove her potential.

Do you think ‘The Queen’ will reign her SmackDown Women’s Championship for a long time? Tell us in the comments.