Dwayne Johnson is the mega Hollywood star right now and is having blockbusters, one after another. Furthermore, The Rock is arguably the happiest person in his personal life and also in his professional life presently.

After his divorce from Dany Garcia Johnson dated singer Lauren Hashian and eventually married her a few years later. He has two daughters with Hashian, Tiana and Jasmine Johnson.

We often see him sharing pictures of him spending time with his wife and daughters on his Instagram.

Dwayne Johnson, in 2014, along with Russian actress Irina Shayk, acted in the movie Hercules. However, Shayk and Johnson were rumored to be dating after the filming of the movie wrapped up.

A year later, in 2015, the 36-year-old actress confirmed her breakup with Real Madrid superstar Cristiano Ronaldo. Immediately, there were speculations about the Russian beauty’s blossoming relationship with the former WWE champion. 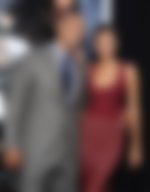 The ‘Hercules’ actor had appeared in several snaps on Irina Shayk’s Instagram. Neither Shayk nor Johnson gave official confirmation of their dating rumors ever. Their alleged relationship ended soon as friends of the model dismissed these claims in the first place.

However, Dwayne Johnson started dating his current wife, Lauren Hashian, in 2015. They first met in 2006 while Johnson was filming ‘The Game Plan’. He dated Hashian for a long time and married her in 2019 in Hawaii in a private ceremony.

The Rock in WWE plans for WrestleMania 39

As per the reports in February 2022, WWE has already planned not one but two major main-event status matches for next year. Roman Reigns vs The Rock is in the plans, but Ronda Rousey vs Becky Lynch is also being planned.

Dave Meltzer in his Wrestling Observer Newsletter shared the idea about WrestleMania 39. He said, “The idea for next year’s event at SoFi Stadium is to have Dwayne “The Rock” Johnson vs. Roman Reigns and Ronda Rousey vs. Becky Lynch as its two big showcase matches.”

Roman Reigns vs The Rock is a dream match at this point for the wrestling fans. ‘The Great One’ gave a hint in his NBC series, Young Rock. He called his match against Roman Reigns, a WrestleMania caliber match.