Dwayne “The Rock” Johnson’s TV series about his childhood, Young Rock, is scheduled for release. This is a project he has been promoting for a while now.

Recently, he visited his high school in Hawaii prior to the release to reminisce about the days upon which Young Rock is based.

He revealed stories about his high school days when he would frequently get in trouble, and his football days. However, it was returning as his current version made the entire experience surreal.

“There’s that term ‘My Cup Runneth Over’, because not only his field but then not only this high school, but the is entire area, this is where I grew up. This is where so many of my life’s defining moments took place and many of which were struggles in the past.”

“To be able to come back here, this version of who I am today on the eve of launching a television show based on my life, much of which took place here in Hawaii, it’s mind boggling. It’s incredible.”

Previously, The Rock revealed a few hilarious stories from his high school days. Furthermore, he spoke about the impact his father, Rocky Johnson, and other pro-wrestlers from that generation had on him.

Various WWE Legends are a part of the series

Some known names are André the Giant, Savage, and Vince McMahon.

Kevin Makely is portraying Savage in the series while Adam Ray is playing the role of Vince McMahon.

WATCH: The Craziest Reaction From Shawn Michaels After Vince McMahon Fires Him on RAW

Will The Rock return to WWE?

The chances of ‘The Brahma Bull’ returning to WWE is bleak, however, Roman Reigns believes that if he was to return, it should be at WrestleMania 39. This is when the event is going Hollywood, and considering Johnson’s work as an actor, it’s the ideal event. 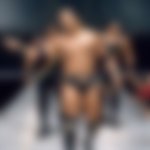 Unfortunately, there has been no update about his return to the ring from his side or WWE. It’s possible that he will not make a comeback if it requires him to commit to a long-term return.

Do you think The Rock will return at WrestleMania 39? Let us know in the comments below.