WWE Hall of Famer JBL, in a recent WrestleMania 3 Watch party, which also featured The Miz and Mark Henry, stated that John Cena cheated in their WrestleMania 21 WWE Championship Match. WWE On Fox shared a clip of this incident:

"He did cheat, thank you very much. He was lucky" – @JCLayfield on @JohnCena's victory at @WrestleMania 21.

In the clip, Bradshaw says, “He did cheat, Thank you very much. He was lucky.” Bradshaw had a gimmick about being an arrogant rich guy, and this line proved it yet again. While his statement made everyone laugh, former heavyweight champion Mark Henry was not impressed. He immediately retorted,“Oh my god. Don’t do that.”

The feud between JBL and John Cena

The JBL- Cena WrestleMania feud saw an impressive buildup. Cena had defeated Angle to earn a spot in the SmackDown main event scene, which prompted JBL, the champion, to start a feud against him. The feud started when JBL distracted Cena in a match against Orlando Jordan, because of which Cena lost his US Championship.

Later that night, Cena came with a lead pipe and ordered JBL to come and face him. However, he was stopped by Teddy Long, who stated that he needs to wait till WrestleMania to get his hands on Bradshaw. Cena then gave an FU  ( now known as Attitude Adjustment) to Long.

The buildup saw Cena destroying Bradshaw’s Limousine and spraying ‘FU’ on JBL’s shirt. On the last episode of SmackDown before WrestleMania, JBL had Cena arrested for Vandalism. After this he gave him a low blow and attacked the defenseless Cena. 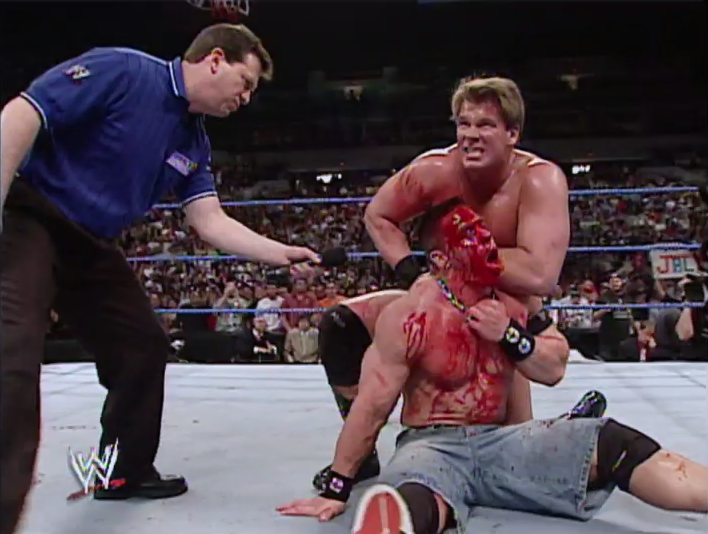 The feud would continue further, resulting in an incredible match at Judgement Day 2005 in a bloody ‘I Quit’ match. The main event of the match ended with John Cena winning, but not before one heck of a beating from the arrogant Bradshaw.

After the match, Cena hit Bradshaw with an exhaust pipe. JBL fell through a glass panel after taking the blow. Due to the blood in this match, the pay per view was rated as TV-MA on the WWE Network.

However, both Superstars share a good friendship offscreen. Cena was even one of the first people to congratulate Bradshaw on his induction to the prestigious WWE Hall of Fame.