COPD is a lung-related disease, which makes it impossible for Roberts to speak for twenty seconds without additional oxygen support.

Roberts had appeared for an interview on Premier Live TV last year. There, the legendary wrestler had talked about various aspects of his career and talked about his health issues.

“What I got is worse than COVID. It’s something that was passed down to me through the bloodline and It is not your happy camper stuff. It’s issues with COPD,” said Jake Roberts.

The disease has made his future unstable and it could be the reason behind his absence from the AEW shows.

Watch This Story: Mr. Money In The Bank to WWE Champion: The Insane Journey  Of Big E

The WWE Hall of Famer made his debut in March 1986. His name Jake “The Snake” Roberts stems from him carrying a snake in his bag, and using it to his advantage to defeat George Wells at WrestleMania II.

Keeping aside his extravagant character, Roberts was quite the skilled craftsman with the mic. Since he was good, they gave Roberts his own talk show segment called “The Snake Pit”. Villainous Jake Roberts became a hit with the fans from the very first segment. 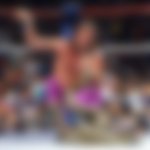 The wrestler even turned face at one time in his career. In 1987, Roberts faced The Honky Tonk Man at WrestleMania III. However, prior to that, he had suffered a neck injury from a guitar.

One of his most spoken-about feuds is the one he had with The Ultimate Warrior in 1991. Warrior wanted to help Roberts take down The Phenom. At this point, Roberts informed Warrior he had to perform three tasks for the knowledge of the dark side, and the third was to walk through a room full of live snakes.

In the end, Warrior would find a chest that had the answer but actually found a King Cobra. As Warrior fell weaker from the bite, Roberts revealed that he was working with Taker and Paul Bearer throughout.

This is when he turned heel, with the message that said never trust a snake.

Jake Roberts left the company in 1992, and WWE inducted him to the WWE Hall of Fame in 2014. Roberts has provided wrestling fans with some incredible memories. Therefore, it is sad to see one of the fan-favorite wrestlers go through something like this.

And we wish Jake ‘The Snake’ Roberts a speedy recovery

What is your favorite moment of Robert’s career? Let us know in the comments.