In the early 2010s, the WWE was arguably at its best. The Undertaker had topped off an amazing storyline with Shawn Michaels and Triple H, the ‘End of an Era’. Dwayne ‘The Rock’ Johnson made sporadic appearances, sending ratings straight up to the moon.

Talent from all across the world was making its mark on the WWE. In the midst of all this, CM Punk was forged into a perennial Superstar.

His feud with John Cena was the stuff of legends, with some of the best crowd work coming from both the performers.

Coming into the new decade, John Cena was at his peak popularity. He was a model babyface, with fans all over the world absolutely adoring him, in every city he performed in.

Punk, on the other hand, was still coming into his own, as a performer in the WWE.

He was already a bonafide legend, in other wrestling promotions like Ring of Honour. He had already become a top-billed wrestler, winning the Heavyweight Championship multiple times. However, his feud with John Cena was when CM Punk was truly embraced by the WWE Universe.

In June 2011, Punk did what a typical heel does, and interfered in John Cena’s match, distracting him enough to allow R-Truth to spear Cena through a table. Punk then picked up the microphone, sat down near the entrance to the ring, and dopped his infamous Pipe Bomb.

Punk broke all barriers of kayfabe, calling out everyone, The Rock, Vince McMahon, Cena, and even the fans. This was shocking, as the facade of kayfabe was never taken down in this way.

Punk even name-dropped competing for wrestling promotions, a complete no-no in the WWE.

The fans, shell-shocked, absolutely loved it. Punk vowed that day that he would leave the WWE, Championship belt in hand. 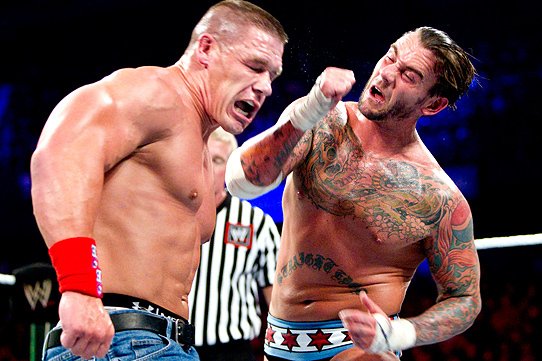 Punk was suspended shortly after, until his contract re-negotiation with McMahon. Cena also confronted McMahon, who gave him an ultimatum. Win the Money In The Bank match, or get fired.

Punk and Cena went on to fight at Money In The Bank at Boston, Cena’s home crowd. It was a spectacular bout, which saw the entire arena cheer for Punk. He eventually stole the win over Cena and literally ran out through the crowd.

Cena went on to make a name for himself in Hollywood. Punk retired a few months after the legendary bout. He is still a very relevant voice in the business, with a spot in WWE Backstage, as an analyst and contributor.